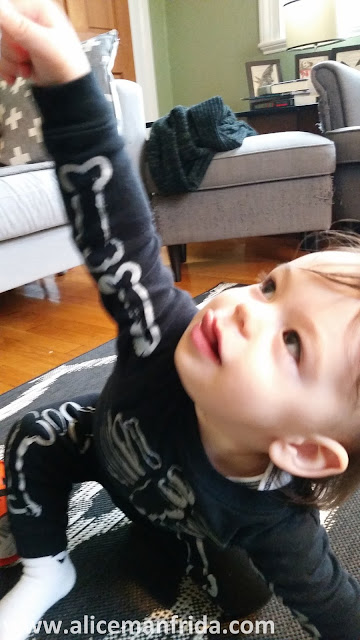 I have been trying to figure out what to dress Harold as for Halloween this year for months. I really thought I'd have it all figured out and it would be epic and there would be no rushing around, but then everything got really hectic and here we are: Halloween is TOMORROW! Last year I had so many ideas but this year I just had no idea.

I dug around the house and came up with a few super easy, super quick, super cute costume ideas for my 15 month old.

Costume Idea 1 - Elliot from E.T.
This is the winning choice for this year! 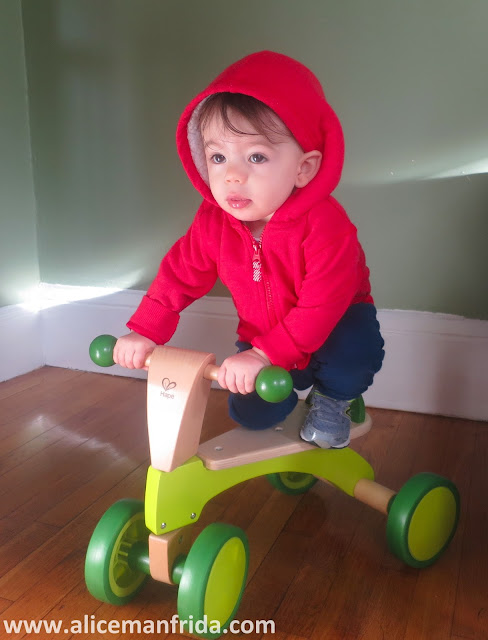 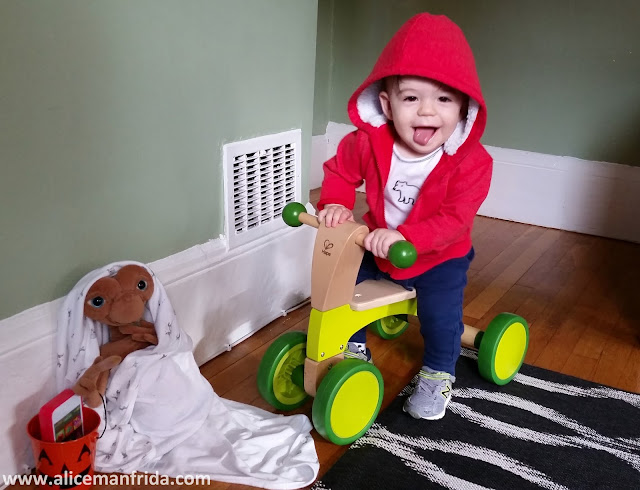 Costume Idea 2 - Skeleton Pajamas
If it's too difficult to pull something together last minute you can always grab the Halloween pajamas! The skeleton jammies are a classic choice in kids' nighttime fashion. 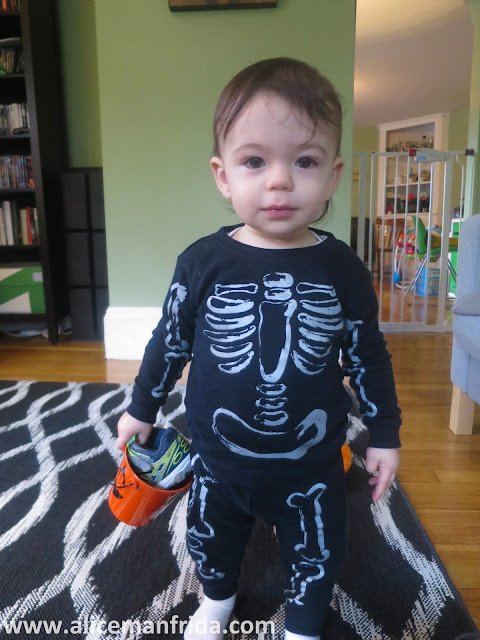 Costume Idea 3 - Paper Bag Mask
This one is hilarious! Harold had so much fun playing with this paper bag mask! He thought it was so funny that he could look out of the eye holes! He kept taking it off so that he could try to put it on by himself, which was adorable. 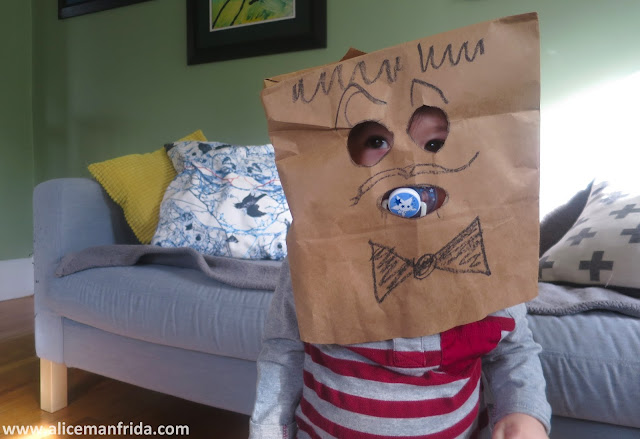 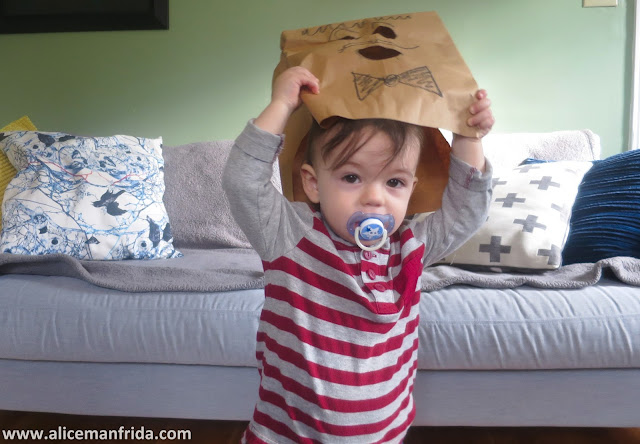 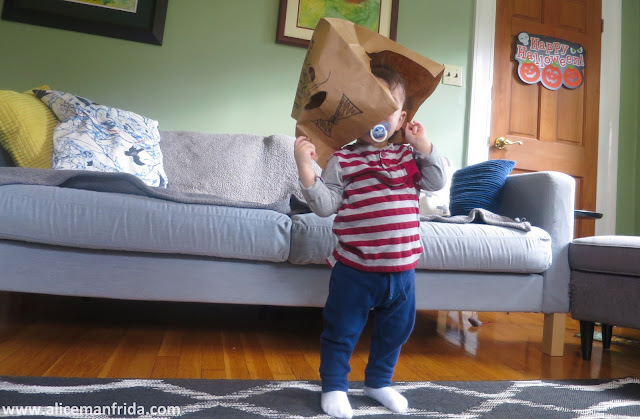 Check out the video to see these costumes in action!

Meals & Movie Snacks | What I Ate

Happy Monday! Before I get into the food pictures I thought I'd give you a little recovery update. When they say you need to wait 6 weeks to lift, they mean SIX weeks. Last Monday (at 5 weeks post op) I stayed home alone with Harold the whole day and I was convinced by the end of the day that I had a hernia and was literally ripping in half. A week later and I was solo-parenting again today and it was so much better. I'm still sore and weak and naptime (during which he did NOT nap) was very difficult but it was a normal kind of suffering like when you workout too hard. Anyway, it's progress!

Now to the FOOD! 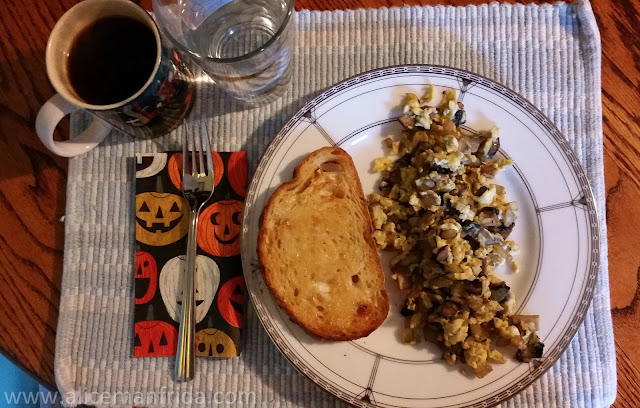 Breakfast was a scramble with mushrooms and onions and a piece of sourdough toast with butter. How cute is that napkin?! 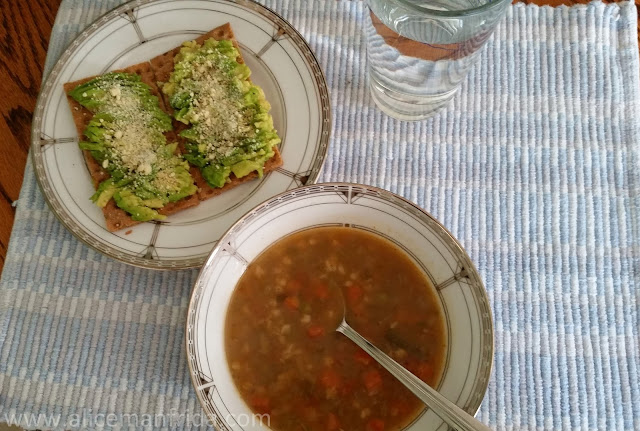 I stayed on the healthy and hearty meal train for lunch by having a bowl of vegetable barley soup and some crackers with avocado and parmesan cheese. This was the end of that for the day. Haha! 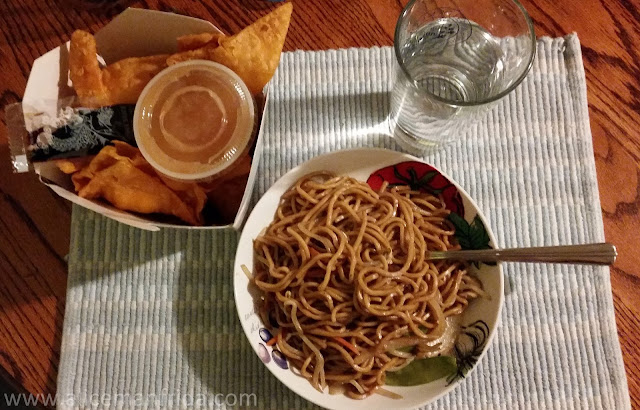 We had no plan for dinner so we walked down to our neighborhood Chinese food place where I got veggie lo mein and crab rangoon (don't worry, Steve helped me eat those rangoons). I also had some candy as an afternoon snack as well as more candy and cheese puffs for dessert (they were movie snacks!!)

Posted by Alice Manfrida at 6:46 PM No comments: 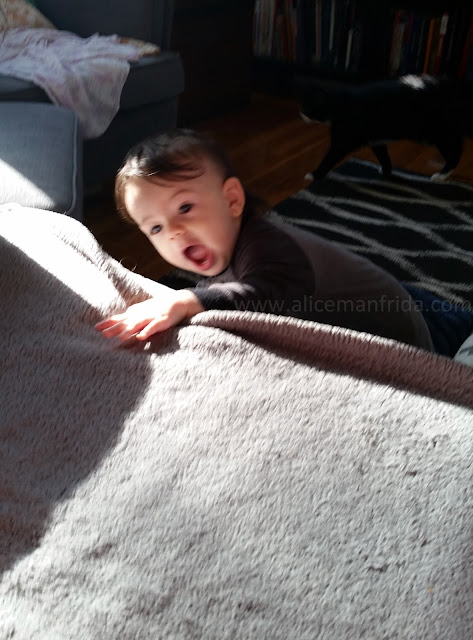 Since I have been recovering from surgery for the past five and half weeks we haven't been able to get out very much. As a result we are all getting cabin fever, especially Harold the very active toddler! He thought it was so hilarious when I took the cushions off the couch. He immediately threw himself down onto them to roll around and try to climb up onto the couch. He couldn't really pull himself up but he did figure out how to get down. :)

Today I had my six week post-op appointment with my surgeon (well, 5 1/2 week) and she said everything looks good and is healing the way it is supposed to. I still need to be careful and stop if I have any pain but other than that I can exercise and do whatever I feel comfortable with. That makes me feel so much better because I've been having so much anxiety about every little strange feeling. Even though I know that the healing process isn't something that happens overnight it still feels like it's been a long time and I want to just be back to normal. Having a professional look at me and say that my body is not ripping apart makes me feel a lot better. 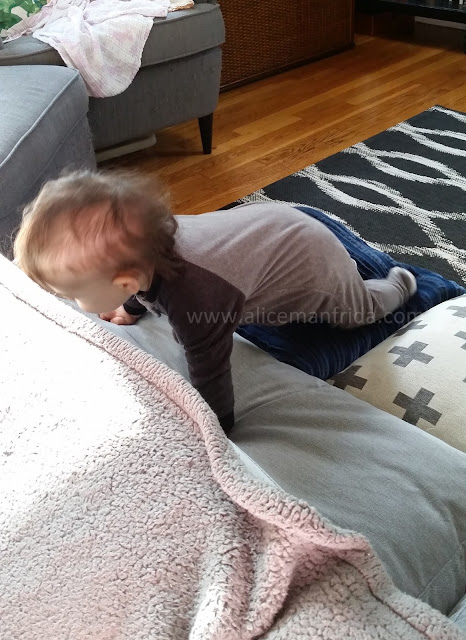 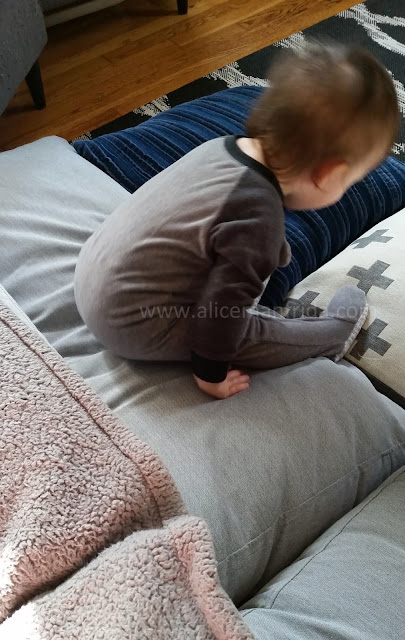 Posted by Alice Manfrida at 5:08 PM No comments:

The Day Without Naps 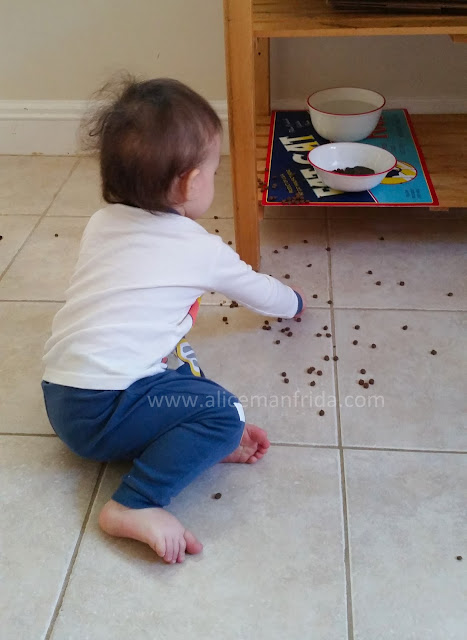 Thankfully I had some help for part of the day but today I was parenting on my own for a good chunk of the day. I'll be 5 weeks post-op on Saturday so I *can pick Harold up if I need to but I still need to limit it and some things I still can't really do. I'd be lying if I said I felt like I was handling this day. It was tough.

We did survive and now the exhausted little thing is running back and forth through the house like a pinball. Steve is cooking dinner and I'm sitting at my desk ignoring everyone while blogging and enjoying a very deserved glass of wine.

Anyway, to balance it out here's a cute picture of Harold with a rock he found the other day. 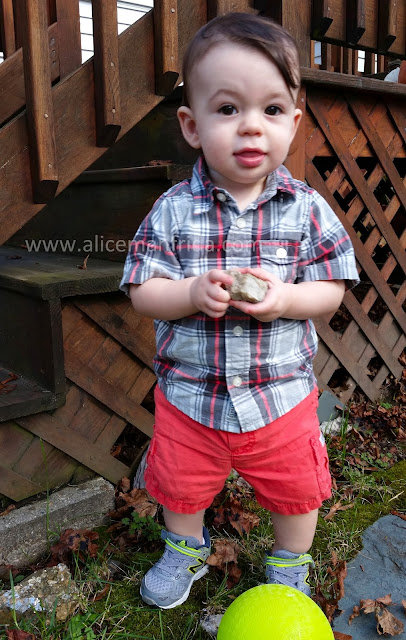 Cheers to a better tomorrow! :)
Posted by Alice Manfrida at 7:17 PM No comments: 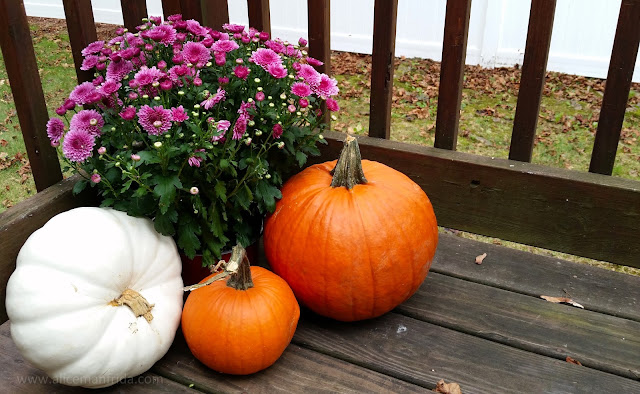 We've got classic New England Fall weather today. Harold was out wandering around the yard earlier this morning but the clouds have since opened up and now it's raining. Today is definitely a day for books, movies, bowls of soup and cups of tea.

I've been reading Stalking Jack the Ripper by Kerri Maniscalco. It's a YA mystery about a girl from the noble class who secretly is apprenticed to her uncle who is teaching her forensic medicine. I'm about halfway through it and so far I'm very annoyed by Thomas, who is also studying under her uncle and is her partner in trying to figure out who is committing the gruesome murders. He's always lurking, which seems to be a theme of the boy character in YA novels, and I think she should just tell him he's a creep instead of thinking to herself that it's strange that she seems to like him even though he's being a creep. Haha! Other than that it's fine and it's giving me some much needed success in the book-finishing-department. I am 15 books behind schedule on my Goodreads goal of reading 60 books this year. (That means I have TWENTY-NINE books to finish before the end of the year.) That seems a bit out of reach.

What's the weather like where you are today? Have you done anything exciting this weekend?
Posted by Alice Manfrida at 11:20 AM No comments: 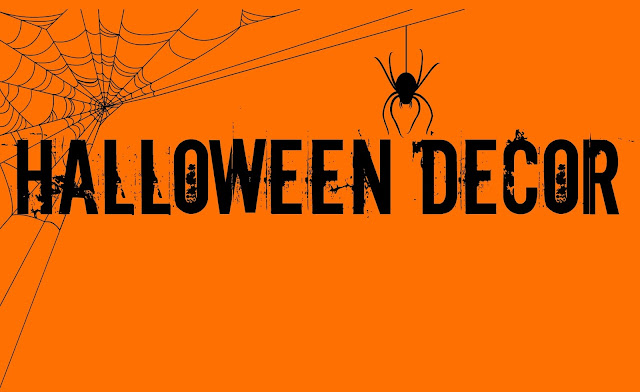 Our home is starting to look pretty spooktacular these days. The cupboards are full of candy. There are spiders and pumpkins and skulls everywhere. There's a chill in the air (well, not today because it's like, 80 degrees...) and I've been hunkering down with the spooky stories and picking out what movies to watch in the coming weeks. There is a Halloween Decor tour over on YouTube. My favorite part is the spooky set up I have on the dining room table. I try to do something different every year even though for the most part I use the same decorations.


Posted by Alice Manfrida at 3:40 PM No comments: 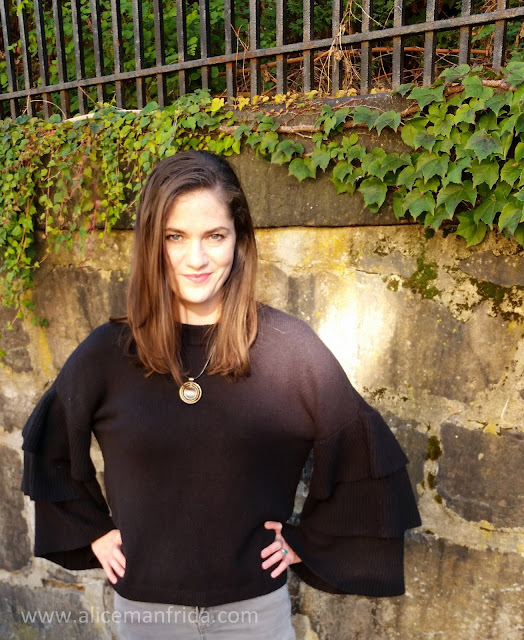 I am so in the mood for Halloween so now that it is October and the weather has finally become a bit more reasonable I'm going for it. I bought this sweater at Target within the last two weeks and I loooove it! It is perfect for days that are cool enough for long sleeves but not so cold that you need a jacket. The ruffled bell sleeves are huge. The fabric is super soft and cozy. I could wear this every day. Check out my YouTube channel to see the whole outfit. 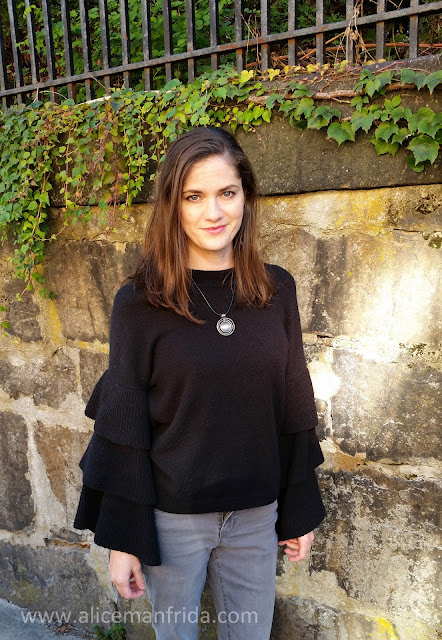 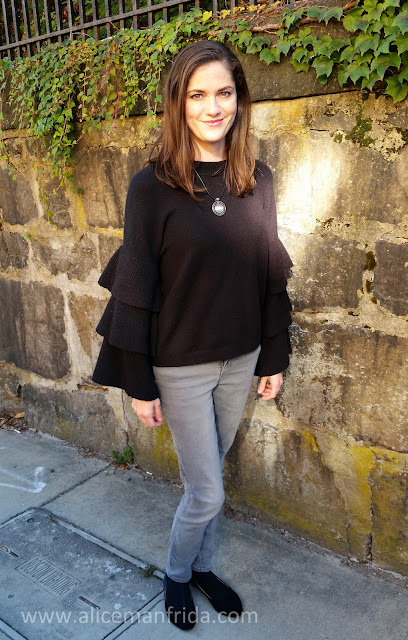 Posted by Alice Manfrida at 6:39 PM No comments: