Harold had his first bottle! I only put 2 oz in the bottle because I wasn't sure how he'd take it and didn't want to waste it if he had a hard time. I went with this Lansinoh mOmma Breastmilk Feeding Bottle on the recommendation of another breastfeeding mom friend and it worked out really well! This is the first time that Steve has ever fed a baby and the first time that Harold has ever had a bottle and they both quickly got the hang of it. 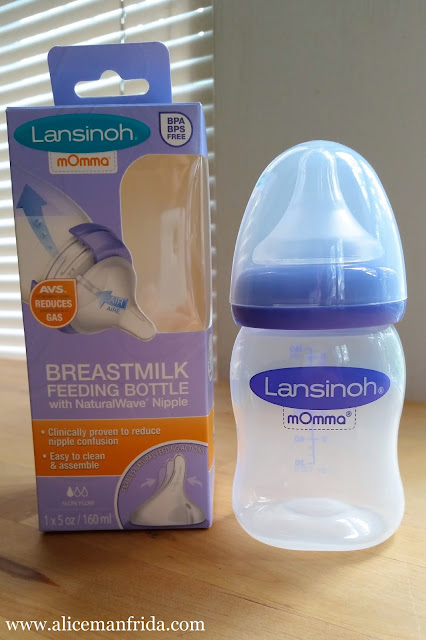 When Steve first put the bottle in the baby's mouth he made a slightly confused face but he quickly latched on and started sucking. The only time he paused during the whole 2 oz. was when he opened his mouth to smile at Steve. It was literally the cutest thing ever!

He did a great job and polished off his little snack in no time at all and then set about trying to nurse from his dad. He kept turning his head into Steve's chest and opening his mouth to try to latch on. Ha ha! So I took him to feed him some more and he had no trouble going back to the boob like normal.

Watch Steve give Harold his first bottle: Trying A Bottle

Obviously since we've only done it the one time I can't really say that he's a pro and that we'll never have a problem but I am confident that this will work and allow me to leave Hal for a bit once in a while. I mean I'm totally not ready to do that yet but my midwife said not to leave it too long without introducing a bottle because otherwise he might not really want to take it, and then I'll be stuck.
Posted by Alice Manfrida at 3:20 PM