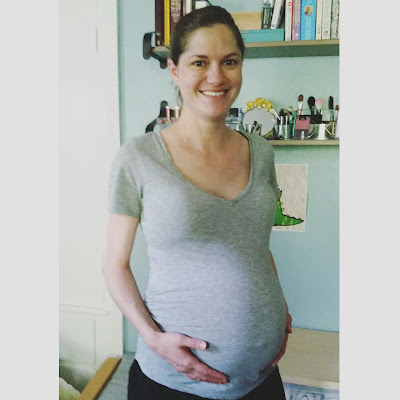 How far along? 40 weeks 5 days
Total weight gain/measurements: Still holding steady at 41” around my belly. I gained that pound back that I had lost last week so I'm back to 29 lbs up, which started at 10 weeks, since I don't know what I weighed before that.
Maternity clothes: I hate them. The end.
Stretch marks: Still none. Some people say that they can show up right after you have the baby. I don't really care if I end up with some but I did have the thought that I have lived with itchy, sensitive skin that burns horribly and never tans for my entire life and if I were to actually get away with no stretch marks, it wouldn't balance it out but it'd come close. I probably just jinxed myself by writing that but really, I would take stretch marks over being constantly itchy.
Sleep: Same as it's been at night...waking up a couple of times to go to the bathroom. I've also been napping a lot during the day. 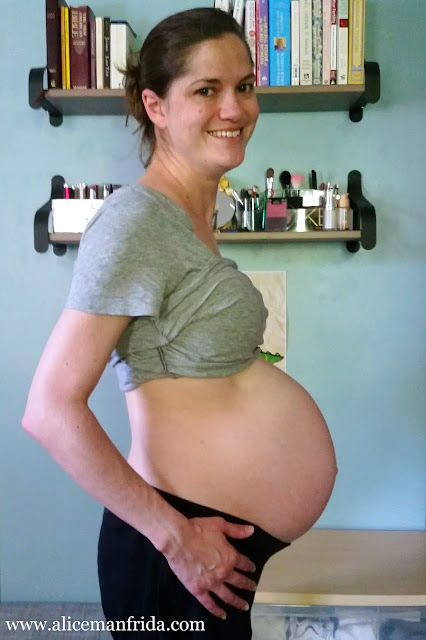 Best moment this week: It's been so hot that we've had to move our walks to be really late after it gets dark and the other night we ran into a baby skunk! I mean, we saw the skunk and then turned around and walked away, but it was so cute! It was little and it's tail was so huge compared to it's body! It wasn't like a teeny tiny baby, but it was very young. Skunks can be really huge so it was cool because I've never seen one that little before.
Miss anything? Sleeping on my stomach. I don't know why I really want to do that now. It's not like I've been able to do it for months and months. I just feel like if I could sleep on my stomach for one night my life would be complete. Ha ha! How weird is that?!
Movement: It's so weird to feel like I can't wait for this baby to get the heck out of my body at the same time as feeling sad that pretty soon I won't be able to feel it moving around in my body ever again. Both are true feelings even though they are kind of opposites.
Food Cravings: Nope.
Anything making you queasy or sick? I've been feeling a little queasy at night but not from anything specific.
Gender: We've just been calling the baby “Baby” lately. We keep saying things like, “Baby, what are you doing in there? Aren't you ready to come out yet, Baby?!” I've started feeling that it's so close to being a little person that I want to call the baby by it's actual name, but I can't name it because it needs to be born first! 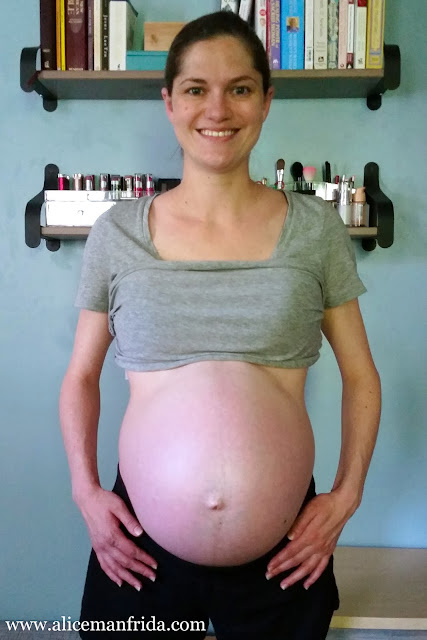 Labor signs: I've been feeling run down and tired since the day before my due date and in the evenings I've been feeling almost like I've got mild morning sickness again. There were a few days when the Braxton Hicks contractions were pretty much non-existent and that was so frustrating. But they started back up again on Saturday night and I've been having them since then. Other than that I've just had extra pressure, extra discharge and today I've been feeling crampy but that's because I had my midwife do an internal check this morning. That was NOT comfortable, by the way, and I don't know why the heck people get them done every week for weeks before they even get to their due date. It doesn't really give enough information until you are past due so I would NOT want to suffer through it for no reason.
Symptoms: I'm still getting heartburn but not quite as bad. That doesn't mean it's not bad...I have really bad heartburn, it's just a smidge less than the worst it could be, I think.
Belly button in or out? Out
Wedding rings on or off? Off
Happy or moody most of the time: I've been SO emotional. I feel like I've been going between napping, eating and crying for at least 4 days in a row.