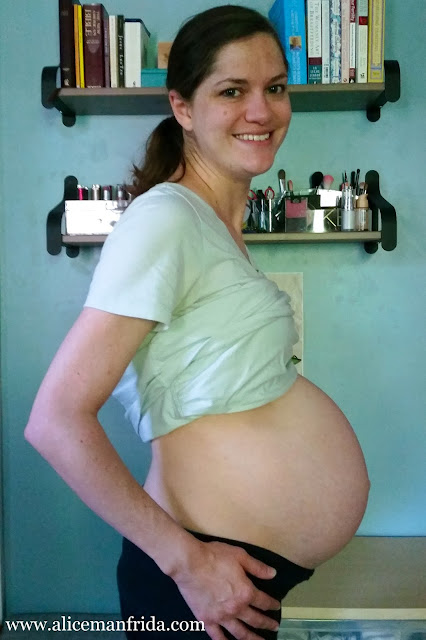 How far along? 37 weeks 6 days
Total weight gain/measurements: Still 27 lbs total because I didn't gain anything since last week. But my belly is 40.5” around, which is bigger. So that is interesting. The baby also felt bigger to the midwife than it was measuring at my ultrasound last week. So clearly the baby is taking literally everything. She asked if my appetite was less with the heat and Steve and I both thought that I've been eating the same amount...which is a lot. Later I realized that we've been walking every day for the past two weeks so I'm guessing that's why I stayed the same weight. I also have heard that some women stop gaining weight, or gain less rapidly, towards the end...so maybe it's a good sign!
Maternity clothes: I am SO sick of wearing the same boring, basic maternity clothes that are starting to wear out from being washed so frequently.
Stretch marks: Still none.
Sleep: Still varies night to night. If I don't get enough at night then I have to take at least one nap, but if I get roughly a full night of sleep then I can usually make it without a nap. I've also been going to bed about an hour earlier at night in general.
Best moment this week: My midwife appointment. I saw a different midwife this week because everything got goofed up with the Monday holiday. We were in and out quick enough to get free parking and she said it sounded like I'm doing a good job. She made a guess at the baby's weight and that was the only info she gave me. I've been on unnecessary information overload with all of these stupid ultrasounds I feel like I've been bullied into getting and it's making me completely insane. NOT being told any details for one day was so amazing and relaxing. :)
Miss anything? Beer. It's summer, it's hot, it was just the 4th of July and I'm so over being pregnant and huge. I really wished I could have had a cold beer at the cookout we went to on Sunday. It's not even a big deal, it's just that I'm so close to the end of pregnancy that everything is starting to look really amazing on the other side of it.
Movement: I've got a healthy active little baby in there.
Food Cravings: Anything cold. 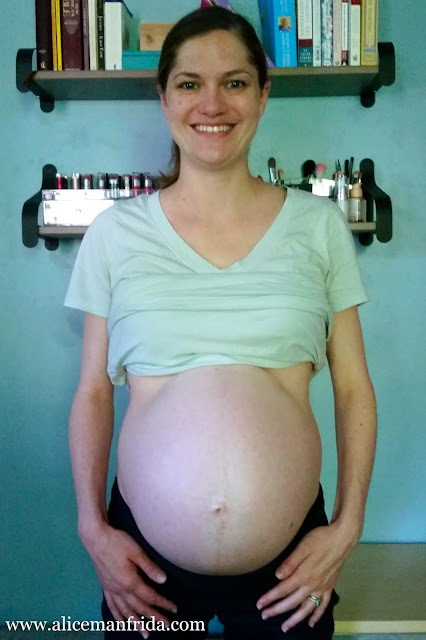 Anything making you queasy or sick? Nope.
Gender: We'll find out soon enough!
Labor signs: Not yet really... The baby is definitely a little lower and when I walk I get that lightning crotch feeling that some people talk about. It's like a zappy pressure feeling where I assume my cervix is. Braxton Hicks contractions are much more frequent and I've felt a little crampy here and there in the last week, but nothing is consistent. I'm not there yet!
Symptoms: My life is basically constant heartburn.
Belly button in or out? Out.
Wedding rings on or off? On when I go somewhere but I've been leaving them off when I'm at home. It's just too hot and they get a little bit stuck sometimes.
Happy or moody most of the time: I'm fine. I don't want to be pregnant anymore but it's not like I'm crying hysterically about it. It's not killing me but I'm not overjoyed. I'm hot and uncomfortable but that's the stage I'm at so past the part where it is physically bothering me, it's fine. So that's my answer. Ha ha!
Looking forward to: Having the baby.

Thanks for reading!
:) Alice
Posted by Alice Manfrida at 2:29 PM