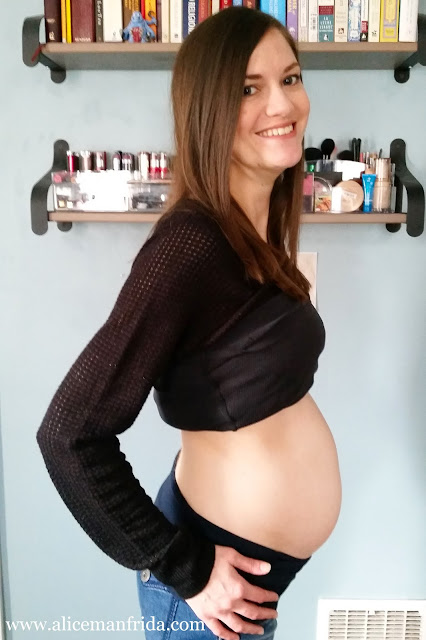 How far along? 22 weeks
Total weight gain/measurements: I gained 7 lbs since my last appointment so that is 10 total! At my appointment with the midwife this morning she measured my uterus and it was about 23cm, which is right on track. She said that they start measuring that way from now on at all of the appointments.
Maternity clothes: I sort of assumed that it would be warm by the time I was only into maternity clothes but the first day of Spring was yesterday and then we promptly got 5 or 6 inches of snow overnight. It's not unheard of, this is New England after all and the weather is all over the place here, but hopefully that was the end of it because I didn't really buy winter-appropriate maternity clothes. I've been wearing the same few things over and over again waiting for warmer weather.
Stretch marks: None yet. I keep obsessively checking around all of my scars. My skin is a little uncomfortable near my appendix scar but it still looks good. I also have a scar on the side of my ribs near my continuously expanding bust-line but it still looks OK, too. I know I could get stretchmarks elsewhere anyway but I feel like if I get them I will at least get them in those places that can't stretch as easily so I've been looking there first. Ha ha
Sleep: A little better this week than it had been but I can't make it more than 4 hours at a time without a trip to the bathroom.
Best moment this week: We decided on a color scheme for the baby's eventual bedroom! I'm planning on keeping the baby in our room in a co-sleeper for as long as makes sense so I thought I'd just wait until the Fall to even think about what to do with the nursery. But then I changed my mind and wanted to have a plan ready. So it's going to be gray, yellow and white...but more like cheery and bright with some gray in it as the neutral color. I think that's cute for a baby, whether it is a girl or a boy. :) 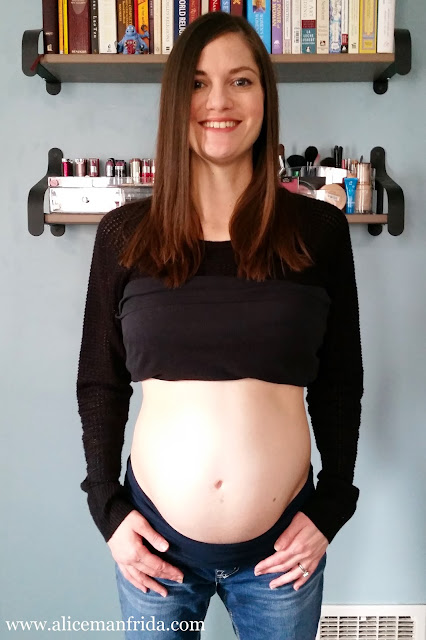 Miss anything? Nope. Pregnancy has many annoying and difficult parts but overall I do like it. I'm not saying that it makes up for anything that I might miss, I'm just saying that I'm enjoying it as it is so I'm not really thinking about anything else at the moment.
Movement: YES! This morning I could feel it on both sides of my belly at once and I told the midwife and she laughed and said that sounds like the splits! Ha ha ha!
Food Cravings: I've been wanting a lot more vegetables this week. I'm still eating a ton of fruit and plenty of carbs. I think my poor body is like, OMG When is it spring and when will the veggies be back in season and actually taste good around here?! (Soon, Body. Soon.)
Anything making you queasy or sick? Nothing this week.
Gender: Don't know.
Labor signs: None.
Symptoms: Nothing new this week.
Belly button in or out? In...but it's gotten kind of sensitive. I think it's much more shallow than normal so the edges are stretched and my shirt feels a little annoying over it. My normal skin is pretty itchy anyway so it's just worse with all the stretching. But it's not overwhelming, just a little more than usual.
Wedding rings on or off? On.
Happy or moody most of the time: Happy.
Looking forward to: The snow melting! :)


Here is the video that went up on my main channel.  It's all about my Pregnancy Skincare Routine.


Thanks for reading!
:) Alice
Posted by Alice Manfrida at 5:31 PM