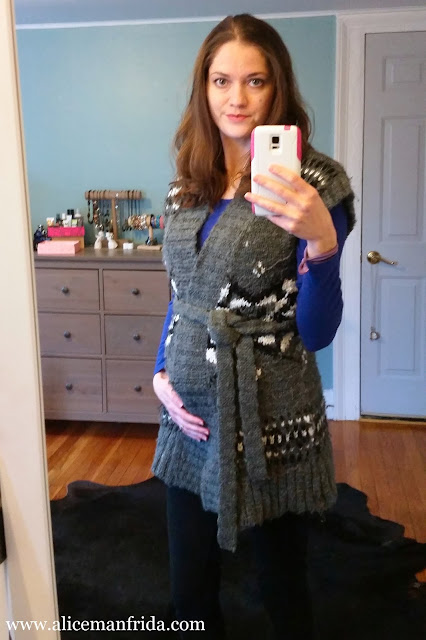 How far along? 20 Weeks... a.k.a. HALFWAY (probably)
Total weight gain/measurements: I'll have to wait a couple more weeks to see what my weight is when I see my midwife next. But, I did measure my belly today! This information is borderline useless at this point because it's the first time I've done it but whatever. The biggest part of my belly is 35 inches. Maybe I'll keep up with this now since the second half of pregnancy has the most growth.
Maternity clothes: I have hit the limit on a lot of my non-pregnancy tops now. Over the weekend I went through my closet and moved everything that I can't wear over to one side and left everything I know I can wear or at least think I could wear if the weather gets warm soon. I already separated everything in my drawers and it's so much easier to get dressed now that I don't have to even look at the stuff that doesn't work.
Stretch marks: None yet.
Sleep: The same at night. This week I've noticed I've started feeling a little more tired during the day again. It's nothing like the unquenchable fatigue of the first trimester but I can tell I'm lugging around this heavy belly and it's wiping me out so I've been trying to take at least a short nap on most days. Best moment this week: Every time I feel the baby move! :)
Miss anything? Nope.
Movement: I have been feeling small movements since 14 or 15 weeks but now I'm definitely feeling bigger, more obvious movement. They are mostly still light movements but I'm feeling them every day now and the best part is that some of them are big kicks or pokes. It feels like tiny doll limbs wiggling around in there! :)
Food Cravings: Um, food. Seriously, the theme of week 20 has been “Feed me!”
Anything making you queasy or sick? Not really but I had some chicken the other day that I couldn't eat. I had two bites and I had to quit. Steve said he thought the texture was a little strange and maybe it was a little old but he ate plenty of it and neither of us got sick from it so it was probably fine. But after those two bites there was no way I could force myself to eat any more of it.
Gender: We don't know. I had been going back and forth in my mind about what I think it is. Now I'm kind of stuck on one possibility, which was my original thought at the beginning. Ha ha...that's cryptic but I don't actually know, of course, so I'm not saying what I think!!
Labor signs: Nope. 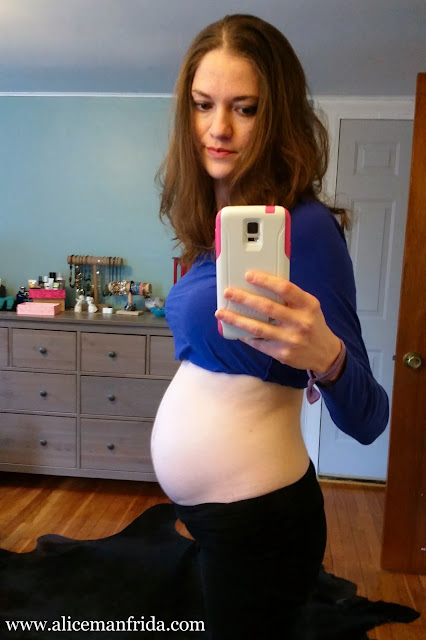 Symptoms: My abdominal muscles are protesting pretty much constantly. I also think I've got a hemorrhoid going on, which is so not cool. It's not that bad actually and witch hazel has been making it feel better but I've been guzzling water and I'm basically 95% made of fiber by now to help keep things moving through as painlessly as possible. Listen, so far I'm happy to report that pregnancy actually hasn't been the worst thing that's ever happened to me in terms of bodily embarrassments but it's definitely getting there.
Belly button in or out? In.
Wedding rings on or off? On.
Happy or moody most of the time: In spite of being sore and stuffed...happy. It legit is the coolest thing to feel tiny body parts bumping around and it's super reassuring. I also am trying to be conscious of how “good” I feel right now because I am aware that a LOT more will happen in the next few months.
Looking forward to: Spring weather! It is supposed get up to be about 70° on Wednesday and I can't wait!

Thanks for reading!
:) Alice
Posted by Alice Manfrida at 4:46 PM