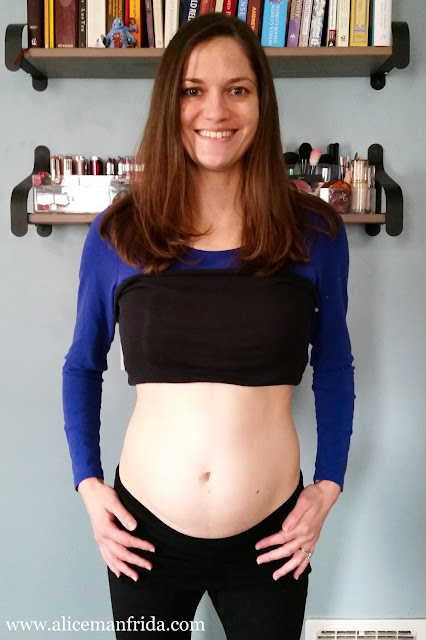 How far along? 18 Weeks – according to my date I'm 18 weeks and 5 days. At my ultrasound I was told the baby is measuring 6 days behind that but they won't change the date on paper unless it is a full week or more different so I'm still going by the original date. Although, the difference matches up exactly to what I thought so I feel pretty validated in my ability to know my own body. :)
Total weight gain: I have gained 3 lbs. since my first appointment two months ago. That was a little frustrating because I genuinely felt like I gained more than that. It was early morning so that may have had something to do with it...I'm sure I weigh more in the evening. I am not super worried because I do feel like every day I eat more than the day before so eventually it will have to stick but it would be reassuring to see that scale move.  ALSO, my midwife told me that my uterus is right under my belly button!  I think that's so crazy -- it's so big now! 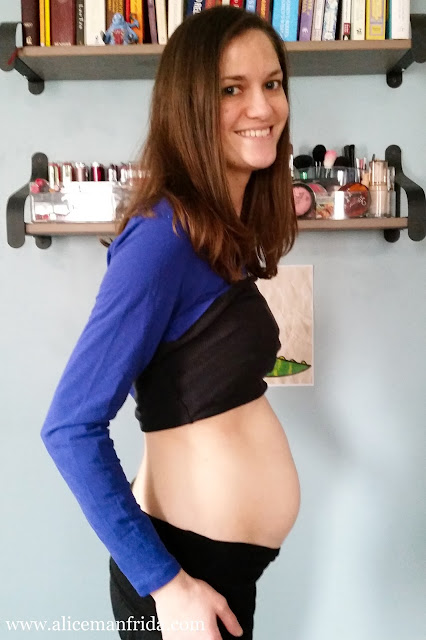 Maternity clothes: I haven't gotten anything new. I pulled out a bunch of clothes that I can't wear anymore and packed them away and I was able to clear out one of my drawers. I've been storing the few little baby things that I've gotten in there.
Stretch marks: None yet. I'm interested to see how long that lasts. I can definitely feel my skin pulling and itching a little bit around my appendix scar.
Sleep: When I am able to stay asleep it's fine but I'm still having a hard time falling back to sleep after getting up to go to the bathroom. I don't usually need a nap during the day but when I do I end up sleeping for 2-3 hours! 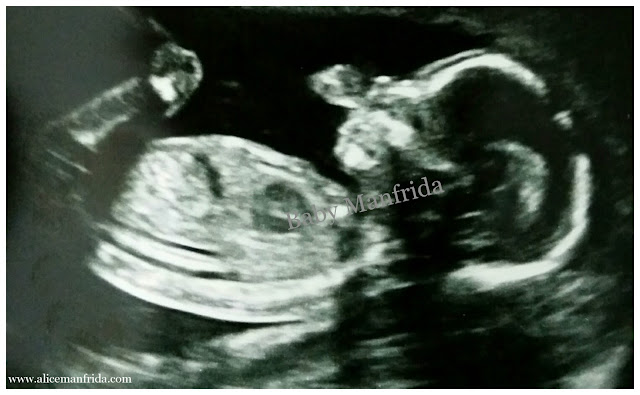 Best moment this week: My ultrasound! It was so cool to see the baby moving around. We got a few pictures to take home so I've got them up on the fridge. I will say that actually seeing it was better than the pictures. I could see all the fingers and toes, the little chambers in the heart, and the little arms were moving all over the place.
Miss anything? I've been missing coffee a little bit. By coffee I mean the buckets of coffee I used to drink. I have had coffee twice in the past couple of weeks but I make my husband split a cup with me just so I can have the smell and taste but I really don't want to drink a whole cup. I don't really think it will do anything to the baby but since I've been off it for 3 months I don't want to get a big caffeine rush and feel sick.
Movement: I can definitely feel the baby now. Mostly it's just tiny little feelings but then there will be a pretty good push or bump here and there. It's really cool. Yesterday I was laying on the couch with my hand on my belly and felt a kick or something right under where my fingers were. I was almost thinking I could feel it on the outside but I think it probably just felt like that because it was right where my hand was and I can feel it from the inside – I think the baby is just way to small to make that big of a movement.
Food Cravings: I had a couple of days this week when I ate carbs pretty much all day. I'm back to normal now and eating a variety of things.
Anything making you queasy or sick? Not really.
Gender: Nope!! We decided to wait until the baby is born to find out. The woman who did our ultrasound told us when she got to the bottom area so that we could look away and then when she was done there she told us it was OK anyway because the legs stayed crossed the whole time anyway! :)
Labor signs: Nope.
Symptoms: I started feeling a little dizzy when I get up, especially in the morning. I have been getting up slowly since the beginning but I've had to be even slower about it now. 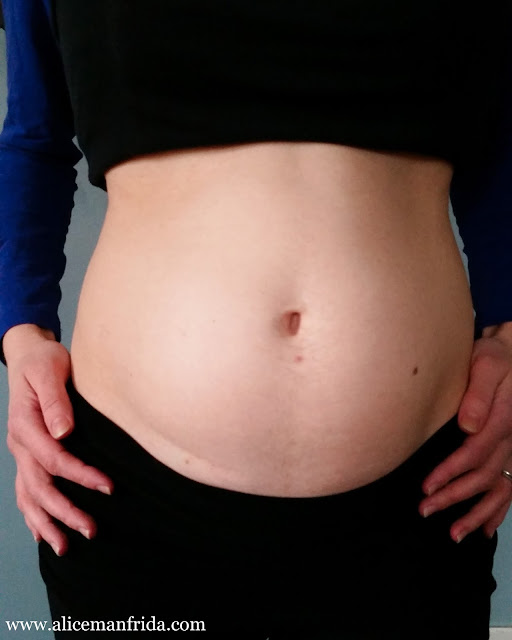 Belly button in or out? In -- but I think it looks different.  I think it is more shallow than normal and Steve thought maybe it's stretching out.
Wedding rings on or off? On.
Happy or moody most of the time: Oh man, BOTH! I felt like I had a bunch of super high highs and super low lows. It's been all over the place and kind of exhausting.
Looking forward to: We ordered a pregnancy pillow and it is supposed to arrive sometime this week! I can't wait! I've been rolling up a blanket and using a throw pillow from my couch and leaning on Steve to try to stay comfortable in bed but it's not really working. I'm so excited for this pillow to get here!!
Posted by Alice Manfrida at 9:30 PM