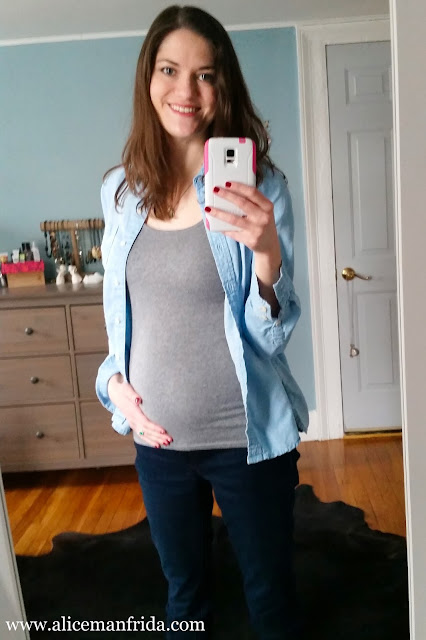 How far along? 17 weeks
Total weight gain/measurements: I won't know until my next midwife appointment but my belly is steadily expanding.
Maternity clothes: I am now exclusively wearing maternity pants. The BeBands don't work anymore. I can still wear a lot of my normal tops but some have been retired for the foreseeable future and I've been mixing in a few maternity tops.
Stretch marks: None yet.
Sleep: I've been having a hard time getting comfortable at night, especially after I wake up to use the bathroom. I've been trying to move my husband around so I can lean back on him like he's a pillow and so far he hasn't been woken up by that plus all of my tossing and turning so that's been helping! :) 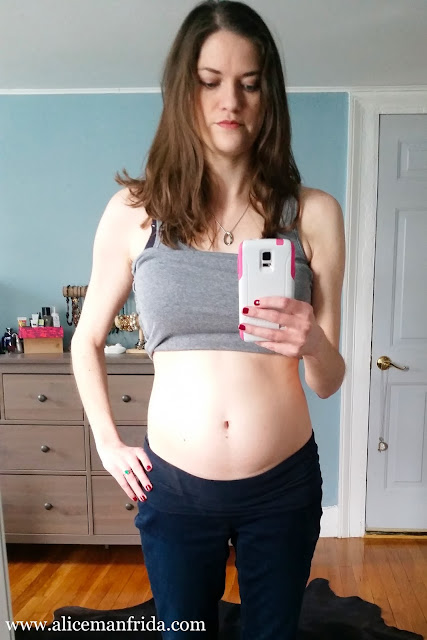 Best moment this week: Finding a few more pairs of maternity pants that actually fit me. Also, my sister gave me a few things and one is literally the cutest onesie ever! It's sort of mint green with little hedgehogs on it! Seriously, I want to get a second one to dress Stella in it...although she would hate it. She definitely isn't the kind of cat who enjoys clothes. :)
Miss anything? Not really.
Movement: I think I've felt some little movements here and there. Once it felt like tentacles wiggling around and other times it just felt like little bubbles or popping sensations... it's in the right spot so I think it's the baby but I don't really know. 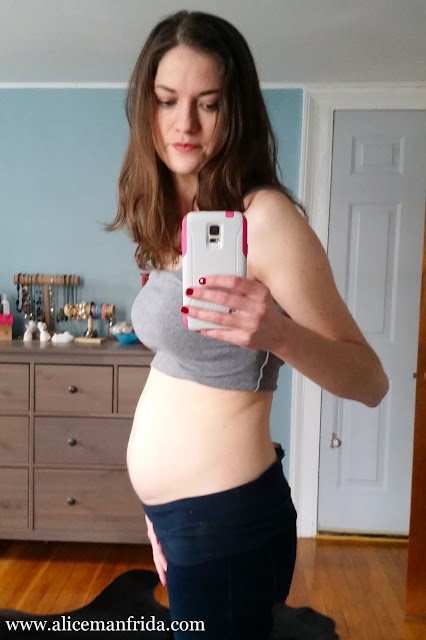 Food Cravings: I've been eating a lot of vanilla yogurt with raspberries and banana on top.
Anything making you queasy or sick? I've had so much nasal congestion and have had some bloody noses and it all drips back in my throat while I'm sleeping so I've thrown up first thing in the morning a few times recently. It's really annoying but I don't feel nauseous or anything.
Gender: Nope.
Labor signs: Nope.
Symptoms: Nothing new this week. I still have heartburn in the evenings but I've found that it's not as bad if I don't drink anything while I'm eating.
Belly button in or out? In.
Wedding rings on or off? On. 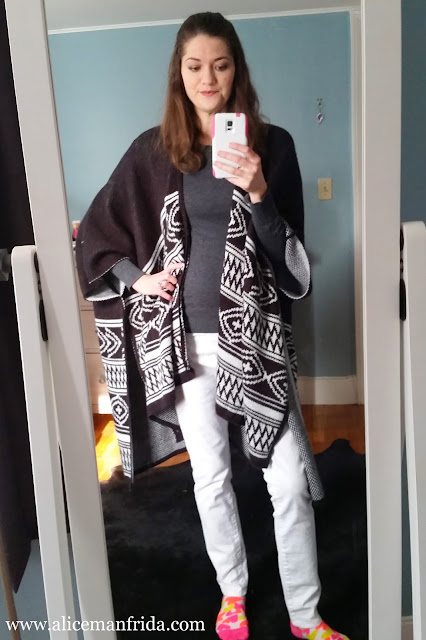 Happy or moody most of the time: Honestly, a little moody and stressed. Not about the pregnancy itself but it's more like my personality doesn't mesh with other people when they get excited and gush about things – especially when the thing is me and my body. I'm not usually one to discuss my emotions because I feel like that is very private. (I realize that the amount I share online may make it seem like I'm not a private person, but trust me, I don't actually share that much.) I didn't share my engagement with most of my family and friends until 3 months before I was going to get married and then planned the wedding quickly. That was awesome because if I had to deal with people obsessing over me as the bride for much longer I would have had to have eloped. Being pregnant it's a longer thing and people tend to get more excited, which is nice, but it's overwhelming and stressful to me. Especially since I still have plenty of months to go, the baby isn't really a baby yet because I'm only 17 weeks and it's not viable yet. It is partially how I always have been and it might also be because I have had a miscarriage and I know that not all pregnancies result in live babies. I am not actually too worried about that, so far everything has been fine and I know I'm healthy. I know that some people might think that what I just said makes me horrible and ungrateful of the love and well wishes that people are giving me but I do appreciate all of that. I'm just trying to explain that I know that everyone means well and I'm glad but maybe it would be nice if it was a little less intense.
Looking forward to: My ultrasound!!! It's happening very soon!!! :)

By the way, I filmed a try-on maternity clothes haul to show the various pants and tops I got along with some nursing bras.  I talked a lot about the different stores that I bought things from and what works for me and what doesn't.


Thanks for reading!
:) Alice
Posted by Alice Manfrida at 6:24 PM