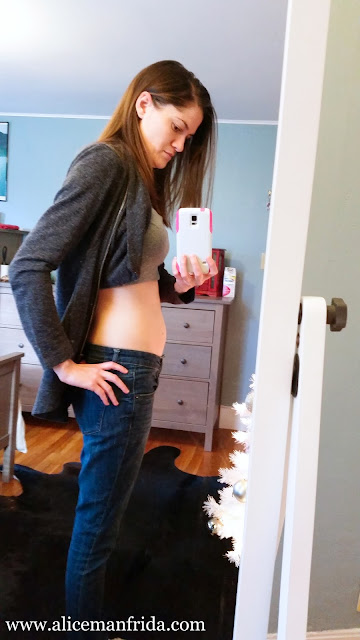 So I'm 12 weeks pregnant so my first trimester is almost over! I think that this first part of pregnancy flew by because I was a zombie during most of it. This time of year is especially crazy anyway with the holidays and with how dark it is where I live as we head into winter. But now it's actually winter, the cold weather has really blown in and it's a new year! I really wanted to do weekly pregnancy updates starting a few weeks ago but I felt too sick and exhausted to do anything so I haven't been able to get to it until now. I've seen a lot of other women do these kinds of update posts and I think it's cool to have a collection of answers to the same questions at the end from each week to see how things have changed. I will say that I found these questions on AnnaSaccone's blog because I think that they really cover everything. (You can find Anna's pregnancy posts linked here.)

How far along? 12 weeks
Total weight gain: 1 lb. I don't tend to weigh myself very often so I only have a rough idea of what my pre-pregnancy weight was. My first appointment with my midwife was on Dec 24 (Christmas Eve!) and then I went back a week and a half later on Jan 4 and had gained 1 lb! I was happy with that because I think that I probably lost a few pounds during the first trimester since I had such a hard time eating anything. I'm just going on how my body was feeling and also that my grandma has said she thought I looked like I had lost weight. Anyway, I'm happy with that! :)
Maternity clothes: I finally bought some maternity bras! I had been waiting because I was too paranoid to buy anything until after I had some professional confirmation. But it was becoming an emergency. None of my regular bras fit at all and I no longer fit into any of my regular sports bras now either. One of my friends told me to just to get nursing bras, even though I'm sure I'll need bigger ones later, because they are the most comfortable. She was completely right about that.
Stretch marks: Nope
Sleep: Better! I've been getting 7 ½ to 8 hours of sleep at night and then on most days a nap in the middle of the day. It's so much better than the constant all day sleeping I was doing a few weeks ago.
Best moment this week: Hearing the heartbeat! My midwife did find it at my main appointment 2 weeks ago but it wasn't very clear so she said I could come back this week to check again when it would be louder. She found it immediately and it was so cool to hear it. I sort of felt like I could have listened to it for the entire day and done nothing else. Ha ha!
Miss anything? This week I was watching a video on YouTube and they were at a sushi place and all of a sudden I wanted it so badly! They had a pile of really yummy looking plate of salmon sashimi and my mouth was watering and I could practically taste it! The other thing is coffee. I don't really miss the caffeine (the withdrawal from that back in November was the worst, by the way). But what I do miss is the ritual of having it every morning. So I guess I'm just emotionally sad about being parted from my friend but I don't really want the taste. Ha ha!!
Movement: Nope
Food Cravings: carbs, dairy, peanut butter and bananas
Anything making you queasy or sick? Pork chops
Gender: Don't know. I keep going back and forth between what I think it is. I'm keeping a list on my phone of people's guesses. Ha ha! So far more people have guessed Girl.
Labor signs: Nope
Symptoms: The new one this week is that I am so hungry! For the most part morning/all day sickness seems to be over but I still am feeling kind of yucky at night. General/constant fatigue also seems to be gone but I definitely get tired really quickly even from things like doing dishes or folding a lot of laundry.
Belly button in or out? In
Wedding rings on or off? On
Happy or moody most of the time: Happy but emotional. My brain is finally wrapping itself around the idea that I'm actually pregnant and I am SO happy that I'm feeling better after a long month and a half of feeling so horrible. I have been crying at movies and stuff a lot this week but I'm chalking that up to my actually being able to stay awake enough to experience things that trigger emotions instead of just sleeping through life!
Looking forward to: Having an actual baby bump! I'm definitely filling out my pants more now and some of them don't fit comfortably anymore. I can see and feel a difference in my shape but obviously it's very slight so it is definitely hidden beneath bulky winter sweaters. 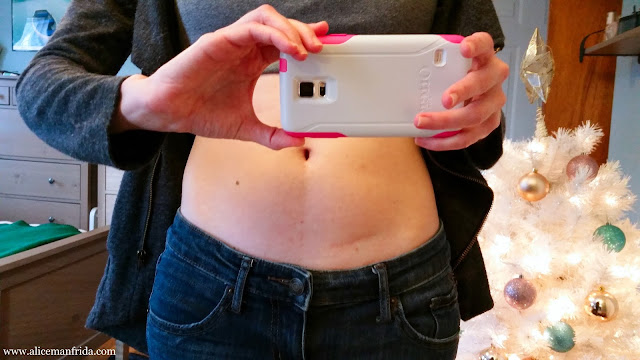 By the way, if anyone else has had their appendix out and is pregnant or has had a baby, let me know!!  I had mine out when I was 8 and I remember it being uncomfortable as I grew up.  I'm a little nervous about it being painful or super itchy as my bump gets bigger but I'm also kind of interested to see what happens.