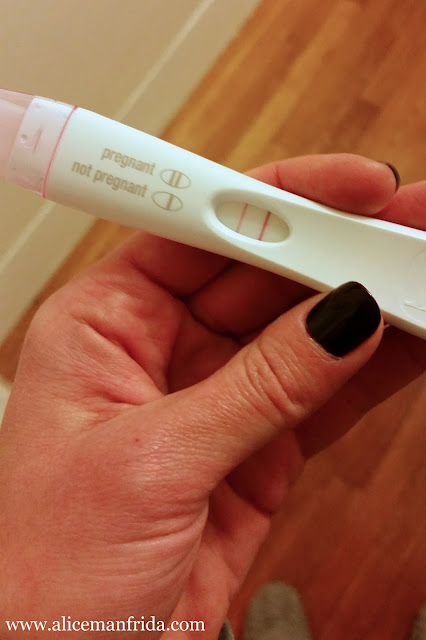 I already announced this over on my daily vlog channel a few days ago but I thought I'd throw it in here as well: I'm pregnant!  We found out two weeks ago and were able to tell our families over the week of Thanksgiving.  It's still pretty early, I'm not exactly sure how far along I am but am guessing it's about 6 weeks.  I've been exhausted for the last three weeks and started feeling nauseous occasionally this week -- all very good signs! :)

I thought I was coming down with a cold but then after a week I thought that I actually might be pregnant.  It's recommended that you take the test in the morning when you first wake up because that when you'll have the most hormones for the test to pick up but I decided on a whim to just take it at night.  I don't know what I expected but I was shocked when the line showed up super dark and also immediately!

One thing I want to mention is that we decided to share this news even though it's still early because we wanted to be able to be excited about it.  This month marks the end of two full years of trying.  I did get pregnant once before in early 2014 but I miscarried.  I will say that this time around is very different.  It's already gone on weeks longer and my pregnancy symptoms seem on track for how far I think I am and they are continuing to be more intense as the days go on so we are cautiously optimistic.  Or just optimistic.  We know that it's still a critical time and that many women/couples like to wait until they are more certain that they've got an established pregnancy.  I wanted to be able to talk freely about it if I wanted to and while I don't currently think that there will be a problem, if there is one, I want to be able to talk freely about that, too.

Anyway, I do not plan to turn this into a pregnancy blog but I will probably post about it from time to time.

Thanks for reading!
:) Alice
Posted by Alice Manfrida at 10:39 PM