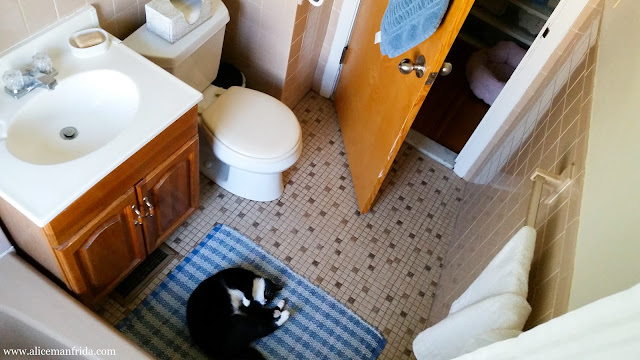 Steve and I have been working hard on revamping our bathroom.  If you watch our vlog then you'll know that we have been pretty single-minded about it for the last week.  The biggest negative about our bathroom is that it is TINY!  The main wall actually slants in from the bathtub to the door which shaves off about 10 inches of space on one side.  Then the door opens directly into the toilet so we can't even get it fully open.  There is a window inside of the shower, small cabinet under the sink and 3 shelves inside the mirror.  Up until last week we were undecided as to whether or not we would be moving out of this apartment.  After thinking a lot about it we decided to resign our lease for another year and spend the rest of the summer fixing some of the issues that we have with this place.  Needless to say, the bathroom was number 1 on the list.

After doing a deep cleaning of the entire room (floor to ceiling but not actually ceiling because we did that not too long ago), we went to The Container Store to see what we could find to fix our storage problems. 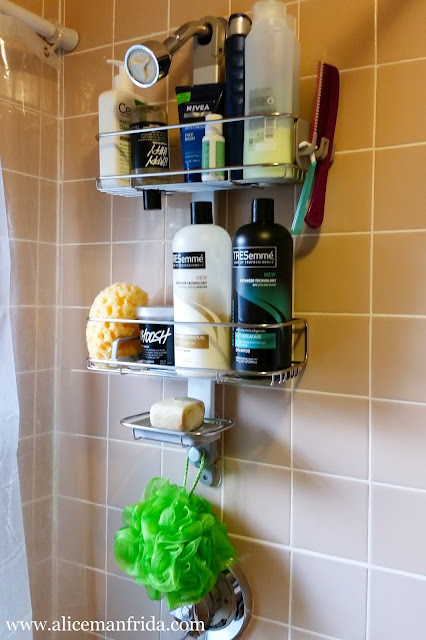 We found this MASSIVE hanging shower caddie.  It is so awesome!  The top has a screw so that the hook can wrap around the shower head and be tightened.  It also has some gripping material up there to keep it secure.  There are also two suction cups at the bottom to help with stability.  The two main baskets are adjustable both up and down and side to side so it can accommodate pretty much any size bottle you have.  The bottom of the soap dish is removable for cleaning, as is the little bar that I have on the lower basket that is creating a separate slot for my sponge.  The hook on the bottom holds the loofah and there are hooks on the side to hang a razor on.

I don't have a before picture of the way we stored our shower products but we kept them in the window.  The loofah was hung on the window lock, the entire window sill was packed and we even had stuff on the top edge of the bottom window pane.  It was annoying to have to move the curtain, everything was wet and slimy and it was just a huge mess.  By the way, to keep the window from being soaked I hung a second curtain rod over the window, put up a clear shower liner and then cut it to the exact size I wanted. 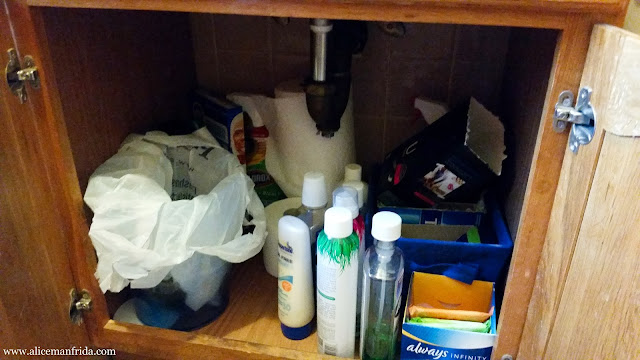 Since we only have the one cabinet for storage it had everything under there.  I had all of the bathroom cleaner shoved in the back.  On the left was the trashcan (because my cat eats plastic) and extra rolls of toilet paper.  Hair products and mouthwash were in the middle because they are too tall to fit in the mirror cabinet and then my drugstore sized stash of feminine products on the right. 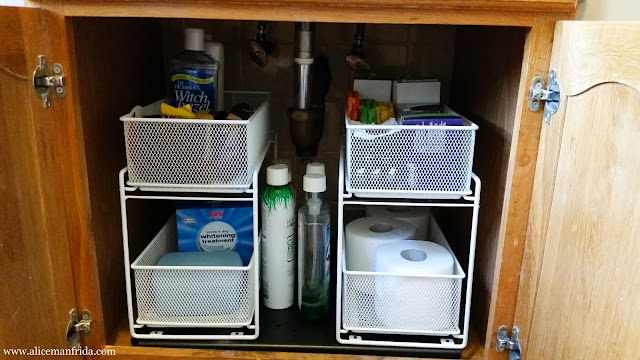 These sliding drawers have made a huge difference already!  We had to prop them up on some shelves from a piece of furniture we aren't currently using because the bottom of the cabinet has a raised edge so the bottom drawer couldn't open until we raised it up.  The tall containers are still in the middle and we had to take out the cleaner and the trash can but everything is so much more accessible now that it's all sorted. 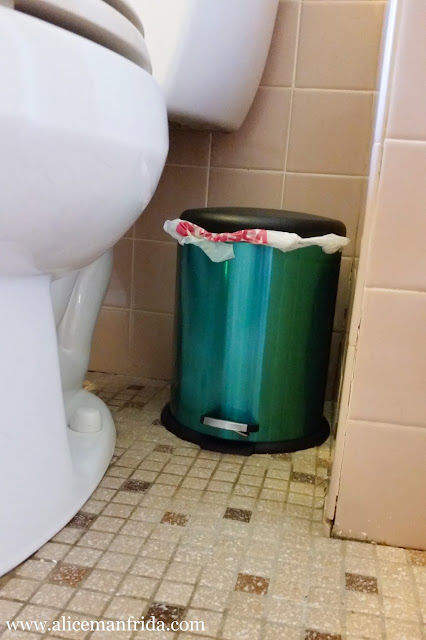 Speaking of the trash.  I bought this can with a lid at Target.  The inside is completely removable so I can tuck the bag down inside which will hopefully minimize the amount of snacking that Stella does with it.  It's not realistic to keep her out of the room completely because a bathroom needs to be open and aired so that it doesn't get moldy and gross.  Every decision I made for this bathroom had to be measured by function first, cat second, and prettiness third. 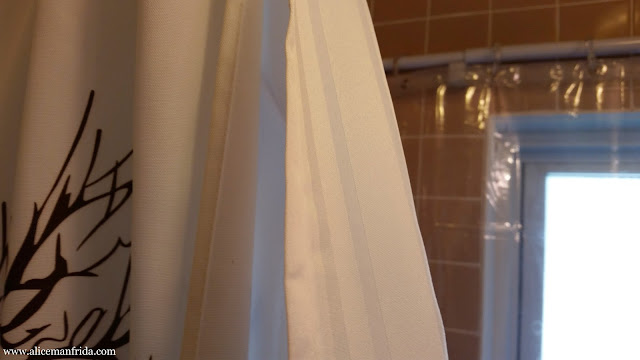 Another cat friendly (hopefully) change that I made was to switch the big shower liner from plastic to fabric.  I bought this machine washable fabric liner at Target.  It will require a little more maintenance because I will have to wash it periodically to keep it free of mold but if the cat isn't choking and barfing then I'll be happy to do it.  :) 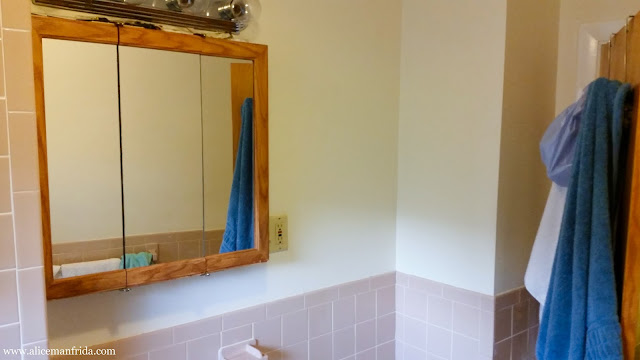 Last but not least, I wanted to add storage in the room itself and also make it a little prettier.  Steve put up three cube shelves from The Container Store (the finish on these is called "driftwood").  I moved some blue glass bottles in that had been in my bedroom and I filled it out with a candle and a couple of new candle holders from Target. 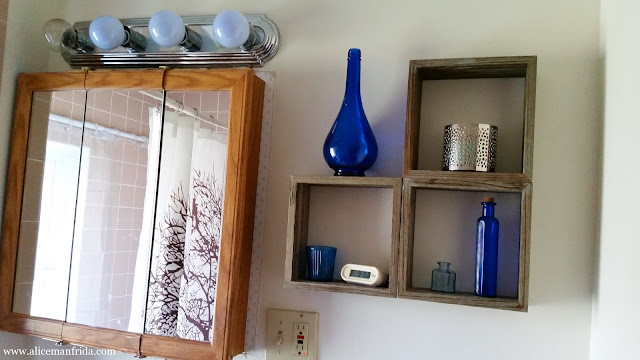 Since we rent this place and it isn't really ours, we are limited in what we actually have control over.  I still don't really like this bathroom, but it is SO much better than before!  If you'd like to see a video tour of the finished bathroom please head over to my YouTube channel or click on the embedded video below!

Thanks for reading!
:) Alice
Posted by Unknown at 4:33 PM