As promised here are a few pictures that I dug up of Stella.  She was probably 2 or 3 years old in these.  Her brother's name was Oscar but he had something wrong with him that made him super fat and then he died.  When they were kittens, Oscar was super cuddly and lovey and Stella was completely insane running around, climbing up screen doors and would claw your eyes out if she could.  They would roll around and wrestle and then cuddle to sleep on a chair together.  Once Oscar was gone Stella became a lot nicer...probably because she realized that if she stayed nasty she'd be missing out on cuddles from the humans.  Even though she is now the ripe old age of 7 (ha ha!) she is still super energetic and tears around the house and plays like a kitten.  I mean I think she plays like a normal kitten which means she's toned it down a little from when she was a ridiculously hyper kitten.  :) 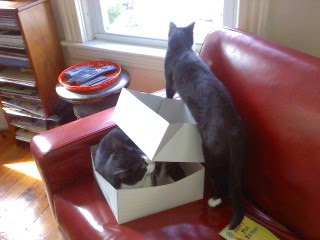 Classic sibling interaction here:
"Get in the box, Oscar!  Don't worry I'll let you out..." *wink* 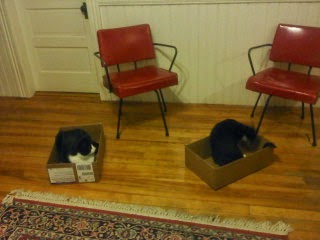 Can you see the size difference?  The boxes are the same. 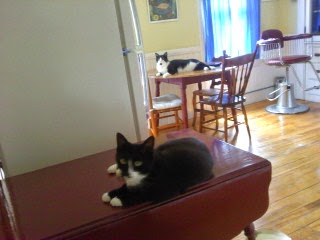 Stella in the front.  Oscar in the back. 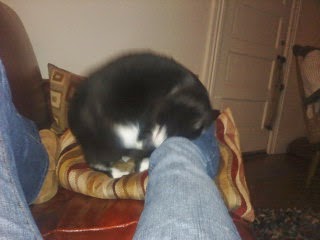 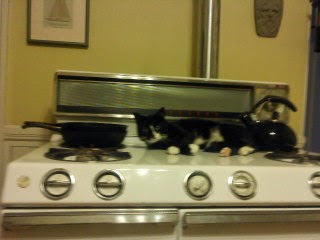 The ManfridaTV vlog that I put up today is all Stella because I thought that was a fitting way to mark her birthday.  I stuck a little slideshow of really old pictures of both Stella and Oscar from when we first got them as teeny tiny little kittens.  They were so cute and skinny!  If you'd like to see then the video is right here, or you can go over to the ManfridaTV channel page and watch it there.

Thanks for reading!
:) Alice
Posted by Unknown at 6:17 PM No comments:

Whoa.  I haven't even looked at this blog for over a month I think.  I keep thinking about how I want to do an overhaul of the look of this thing but then am undecided about what I want to do.  So then I don't want to even post anything because I want to change it up but then...vicious cycle.  Also I haven't even been reading blogs.  Maybe I've just needed a break.

Anyway, here I am and here you are, Lovely Reader, so I'll tell you what I've been up to.
:)

1. WORKING!  If anyone else works in the retail world then you'll know that it is slow, slow, slow in the winter once the holidays are over.  Now that it's spring and heading into summer I've been at work what feels like every day.  It's not every day but it just feels like it because my feet hurt.  Ha ha!

2. CAR SHOPPING!  Well, car researching.  We planned to buy a car some time by the end of summer this year.  We've been planning that for about a year.  And now it's finally time to actually get one!  We've been narrowing down our choices and figuring out where we want to go look.  I'll keep you posted on that.

3. EATING OUT!  Our refrigerator broke and since we rent our apartment we can't always deal with things like this in a timely manner.  So the repairman is supposed to come look at it tomorrow and will hopefully be able to fix it.  If not...ugh I don't even want to think about it.  We noticed that all of our produce was going bad at an alarmingly fast rate and we had to throw out a lot of stuff.  Then about a week ago I realized that nothing was actually all that cold so I got a thermometer and confirmed that it wasn't.  So we've been either getting food delivered or going out to restaurants.

1. DAILY VLOGGING!  My husband and I bought a better camera and started a daily vlog channel on YouTube.  I just posted vlog number 25 this morning!  We called the channel ManfridaTV because we are literally the most clever people you'll ever meet.  Ha ha!  If you want to watch today's vlog I'll leave it here.  But I'd love it if you'd head over to our channel and subscribe.  We haven't really been shouting it from the rooftops yet (well, until now!!) because we felt like we should actually work on getting a bunch of videos up first but after
25 days we're still having fun doing it so we're going to keep going.

2. READ-A-THONS!  That's right.  I've become totally addicted to participating in read-a-thons with people on the internet.  It's seriously SO FUN!  You read books, cheer (or cry) on Twitter and Instagram, and make internet friends.  The craziest one I've done so far was a 24-hour one but most are held over a long weekend or a full week so you just read when you can instead of staying up all night long.

Thanks for reading even though I've been an absentee blogger lately!  What have you been up to?  Let's get reacquainted in the comments!
:) Alice

P.S. Today is Stella's birthday!  She's 7 years old!!  I can't believe all of the crazy life that has been lived by me and by her in the last 7 years and I'm very happy to be able to get all of the Birthday Kitty Snuggles with her today.  I'm going to dig out some vintage kitten pictures and put them up tomorrow in a Flashback Friday post.  See you tomorrow!! (promise)
Posted by Unknown at 1:12 PM 2 comments: