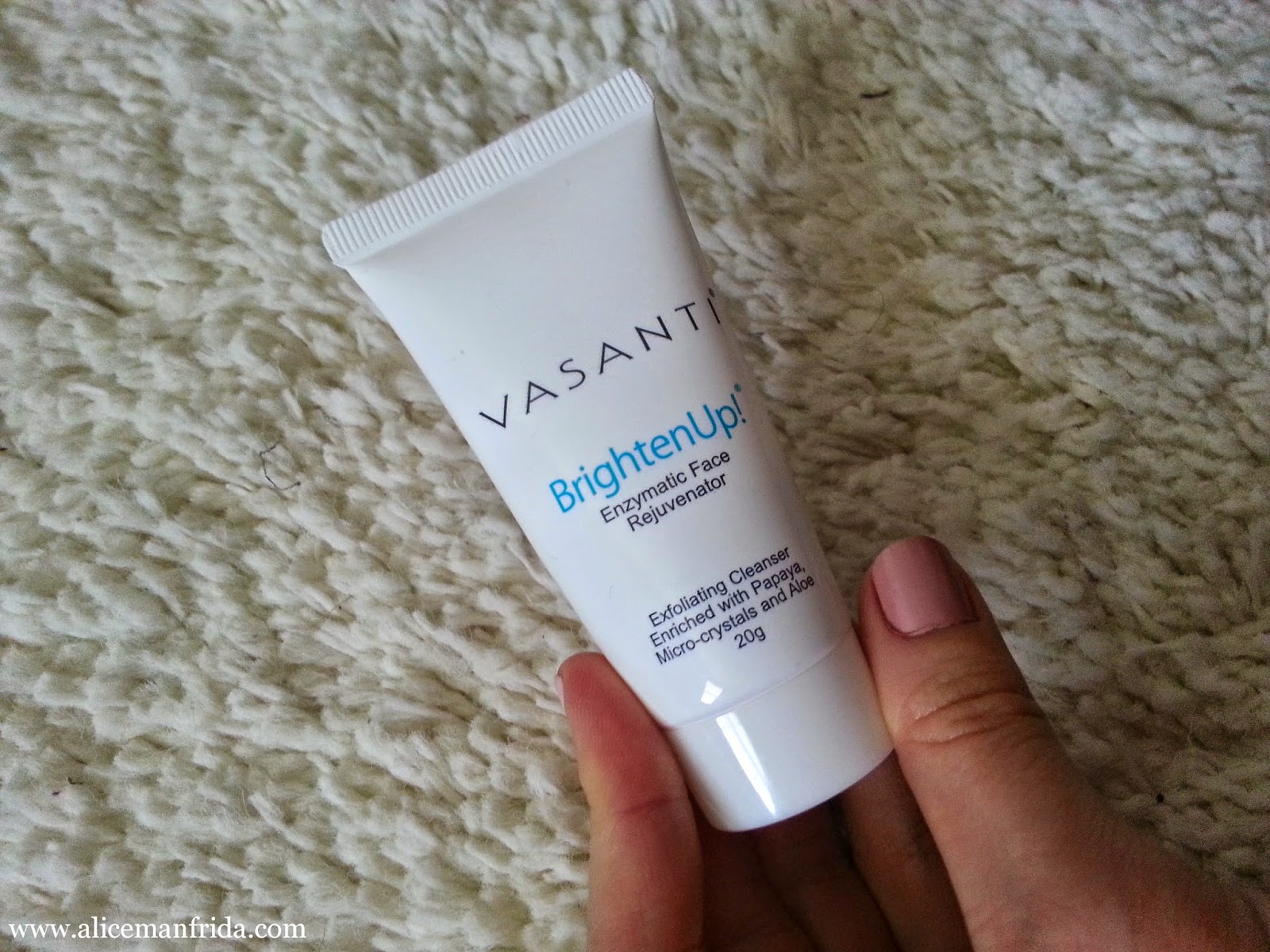 This post will have two parts.  The first is a quick, mini review of the BrightenUp! Enzymatic Face Rejuvenator from Vasanti.  The second is going to be me being a teacher and explaining how to be nice to others.  Stick with me.  It's important.

My sister received this sample-sized Exfoliating Cleanser in a recent Birchbox (it's a monthly subscription service that sends you product samples to try based on a survey that you fill out telling what you are interested in trying.)  I tried it once (hence the MINI review) while I was staying at her place for a sleepover.  On that day I was in the middle of what has probably been the worst breakout I've ever had.  Maybe not the worst in terms of intensity but definitely worst in terms of how long it lasted.  (As of today it's been over a month and although it's mostly healed now I feel like I'll never have clear skin again...I'm sure that in reality I will but it doesn't feel that way.)

ANYWAY..... Vasanti's BrightenUp! felt so amazing to use!  It sort of felt like sand; that's how fine the grit was.  The package says that you can use it three to five times a week.  Obviously, since I only used it once, I can't speak to that in an informed way, but I would probably not use it more than once a week, just because I think that would be too much for my skin.  After using this I put on my normal moisturizer (Vanishing Cream from Lush) and I swear I could FEEL it soaking into my skin.  My face felt soooo good!

PART TWO
(Clamors up onto soapbox.)

It is my firm belief that it is the job of all adults to help all children to grow up as well as they can.  (This is Teacher-Alice talking btw, and I can do that...my M.Ed degree says I can.)  I've noticed that a number of fairly well-known YouTubers have been having issues with nasty comments and such.  It seems like they are about lots of things but I think, owing to the fact that these women talk about makeup and other beauty products a lot, much of this negativity is centered around their skin, their looks in general, etc.

I would like to say that everyone has skin.  Everyone who is lucky enough to grow up to actually be an adult in this world has gone through puberty.  Hormones do all sorts of things to all sorts of parts of a person's body.  What happens can be different.  For me, I had really nice skin during my teen years.  I don't know if that was because I was a "late bloomer" or because I was sweating it all out during cross-country and track practice or because of birth control pills keeping everything level.  Other people have insanely horrible acne that leaves them scarred when they finally get to the end.  Most people fall somewhere in the middle.

I'm not a skin care expert, or a man, so I don't know what happens to them once they are adults, but for me and every woman I know, as we all approached 30 those awesome hormones started changing again.  The entire feel of your skin changes.  Mine feels thinner, which is weird.  The sun exposure (even if you never went tanning) that has accumulated over all of those years of living outside of a cave starts to show up.  Now there are wrinkles and the breakouts come back.  Pregnancy, aging, working so much that you miss out on sleep and only have coffee for breakfast are only some of the reasons that adults have less than perfect skin.  If you are not a small baby you will NOT have plump clear perfect skin.  And honestly, even baby acne is a thing.

So, because I have created this platform for saying whatever I want I will say this:  The internet is public.  You all know that.  Think.  Before.  You.  Comment.  I don't think there is ever an excuse for being publicly obnoxious.  It doesn't matter if you are 80 years old pretending you don't understand the internet...if you're on it, you get it.  It also doesn't matter if you are 11 years old.  Children do need these things explained to them in age-appropriate ways, but it's still unacceptable.  And fyi, mean things disguised as complements do NOT count as complements.

I'm linking this post from essiebutton because I think that she has said it the best and you should all go read what she has to say.  "Everyone is hot."

(Carefully steps off soapbox.)
Posted by Unknown at 12:28 PM