Today's What I Ate post is slightly different than normal.  Instead of posting what I ate in one day I've got pictures of a bunch of things I ate last week while Steve and I were on vacation.  We were in a cabin in the woods in Maine.  So we did one big grocery store trip on the way up there and cooked all week.  Before we left we loaded up a few bags and coolers with food from our house so we wouldn't have to waste anything or spend extra money.  We bought some treats, like ice cream and chips, that we don't have all the time but figured we should have some junk food because...vacation.  :) 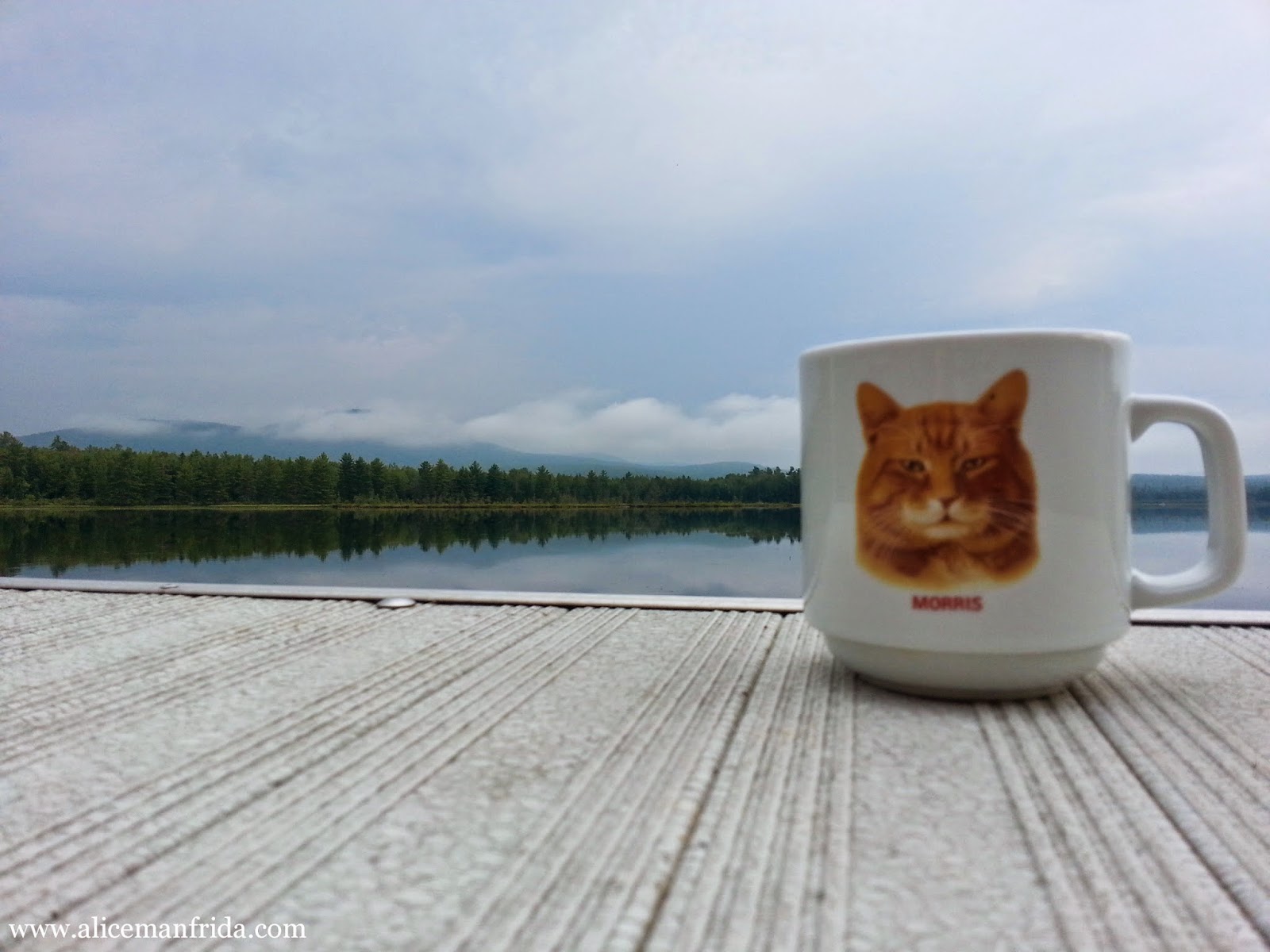 I drank black coffee with cinnamon every day out of this random kitty mug.  This is a picture of the Morris kitty enjoying the view from the end of the dock. 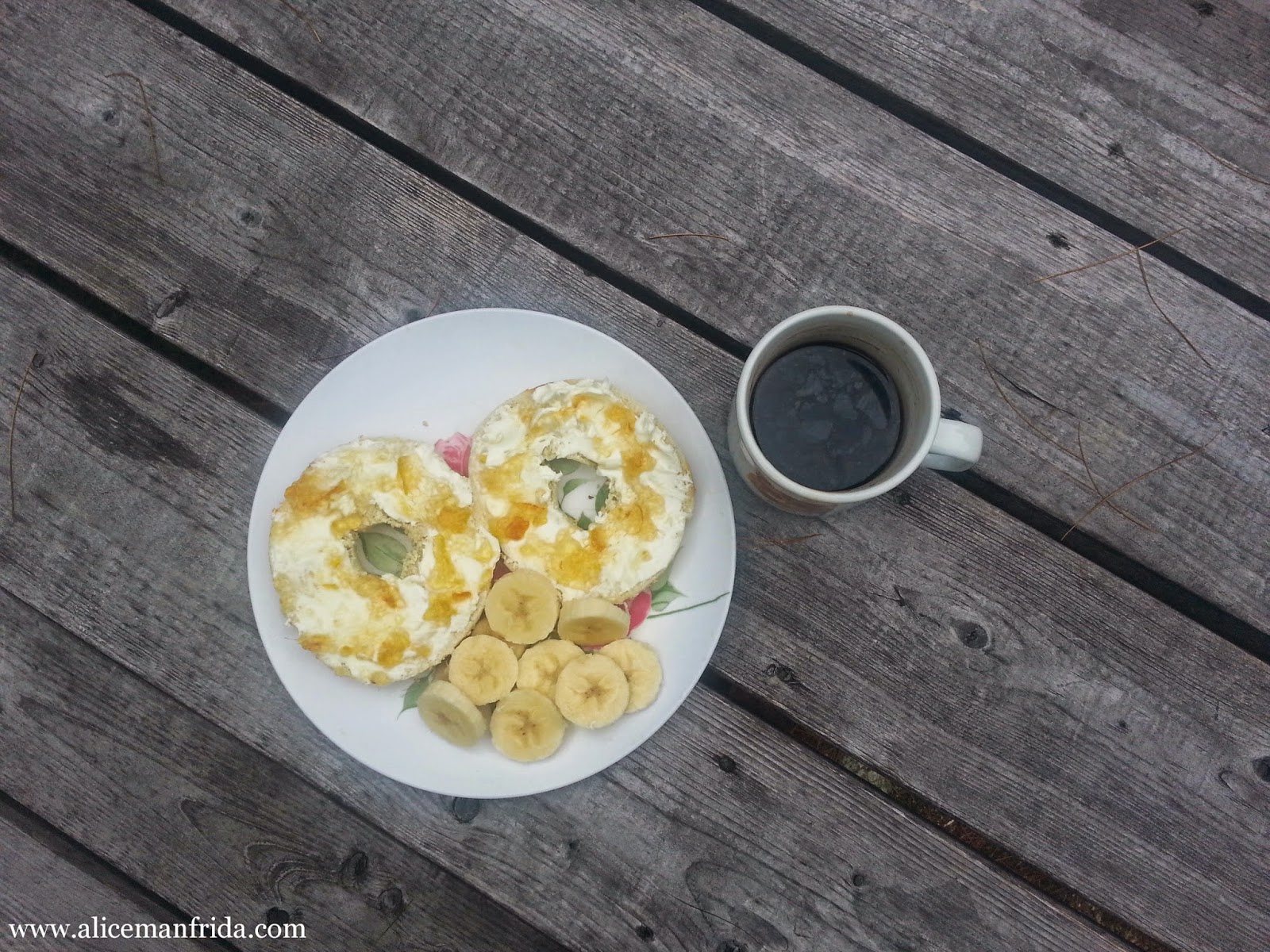 Sesame bagel with cream cheese and orange marmalade, half a banana, and coffee. 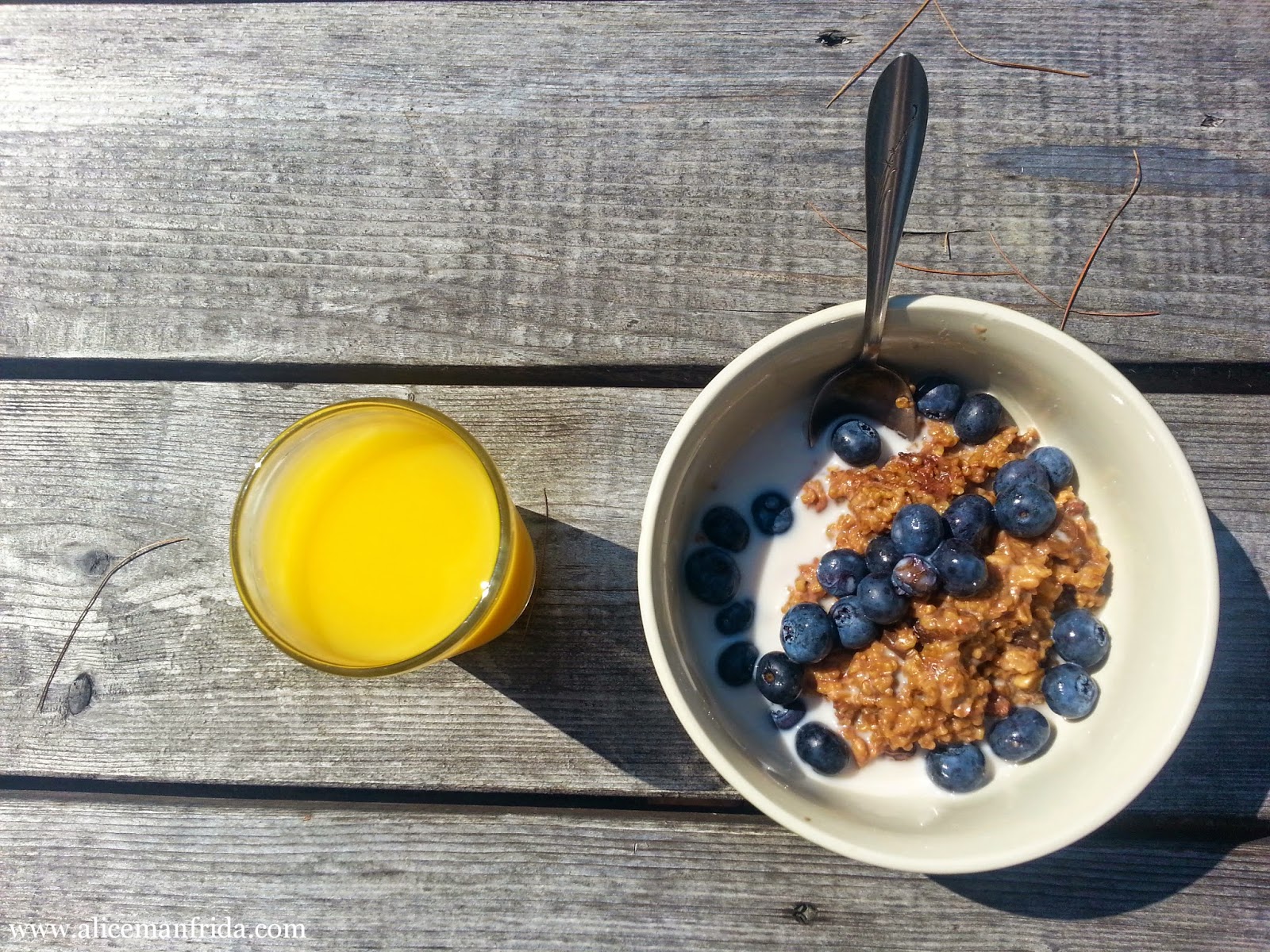 I made oatmeal the way I normally do with half almond milk and half water.  I put raisins, chopped walnuts, and blackstrap molasses in while it was cooking.  I put extra almond milk and blueberries on top and had a glass of orange juice. 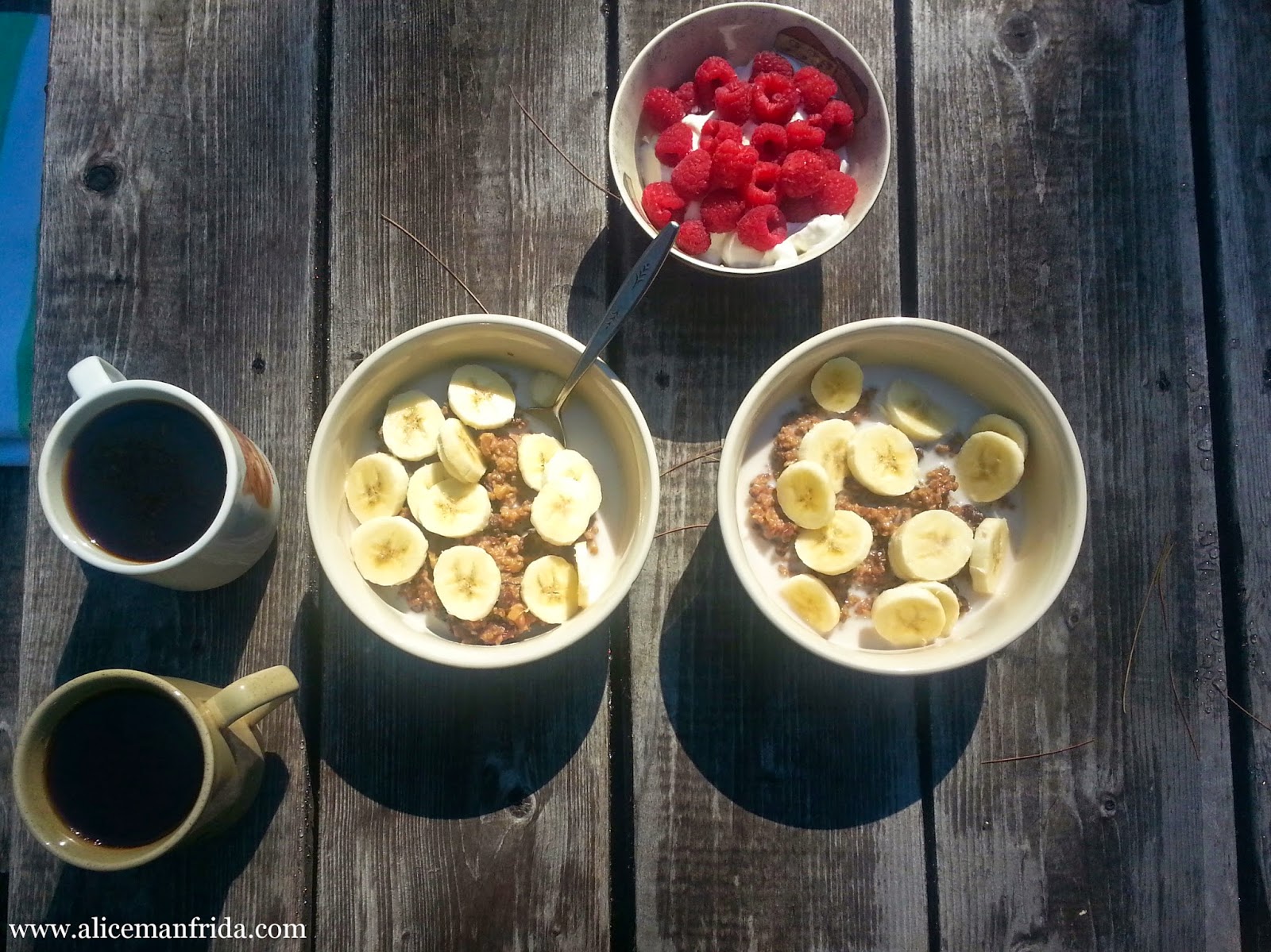 More oatmeal!  I made it exactly the same as the other day but swapped the blueberries for bananas because I was saving the rest of the blueberries to make fruit salad.  Since a hearty bowl of oatmeal wasn't enough for Steve, he also had some yogurt with raspberries. 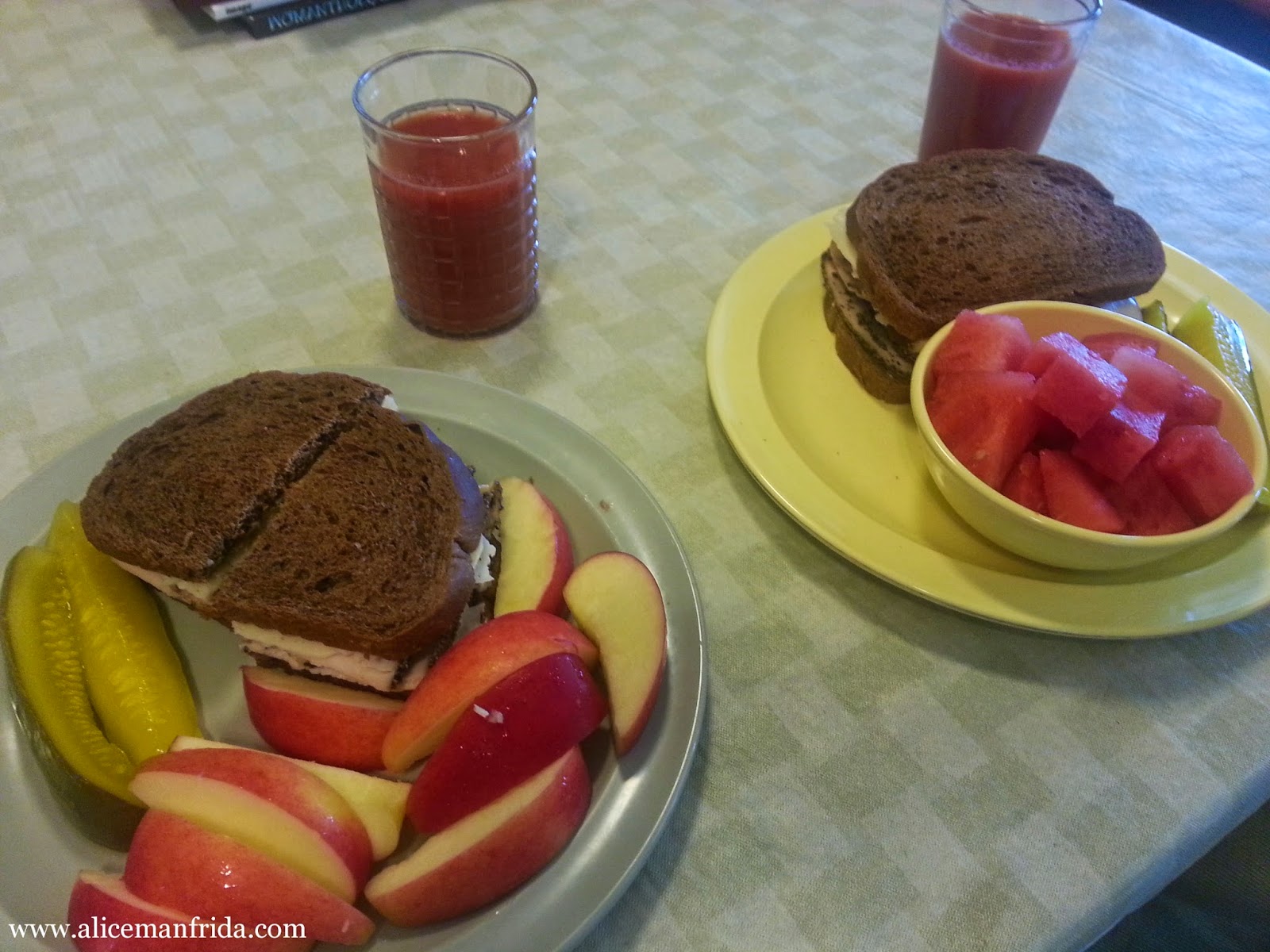 Turkey and cheese sandwiches with pickles.  I had an apple and Steve had watermelon.  We both had my fave: low sodium V8. 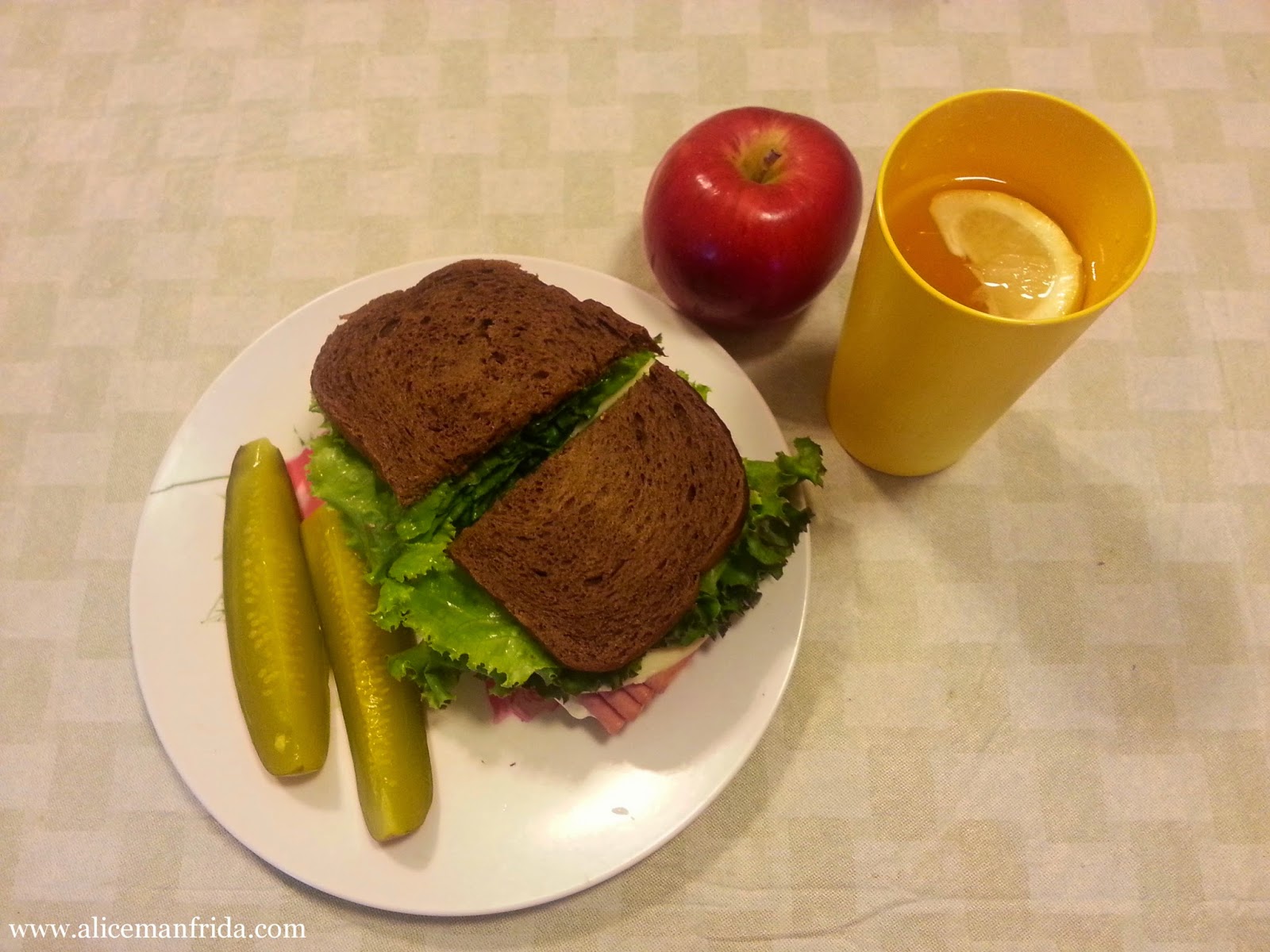 Here's another sandwich.  This one has bologna and cheese and lettuce.  I think this is the second time I've had bologna this year.  I also had lemon water, an apple and pickles. 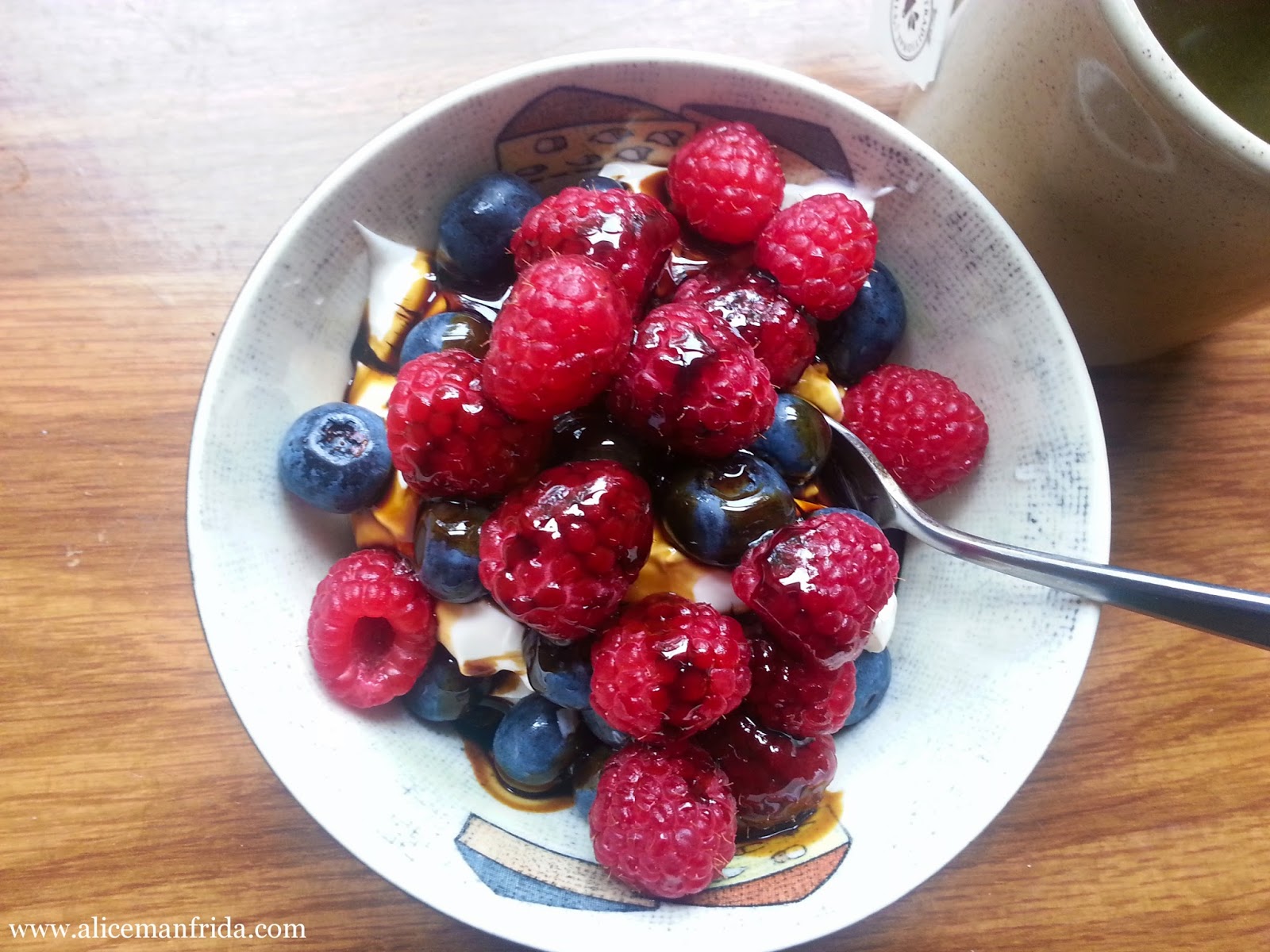 Greek yogurt with berries and blackstrap molasses with a cup of tea.  This was ok.  I like yogurt better with honey or maple syrup but I didn't have those things so I improvised. 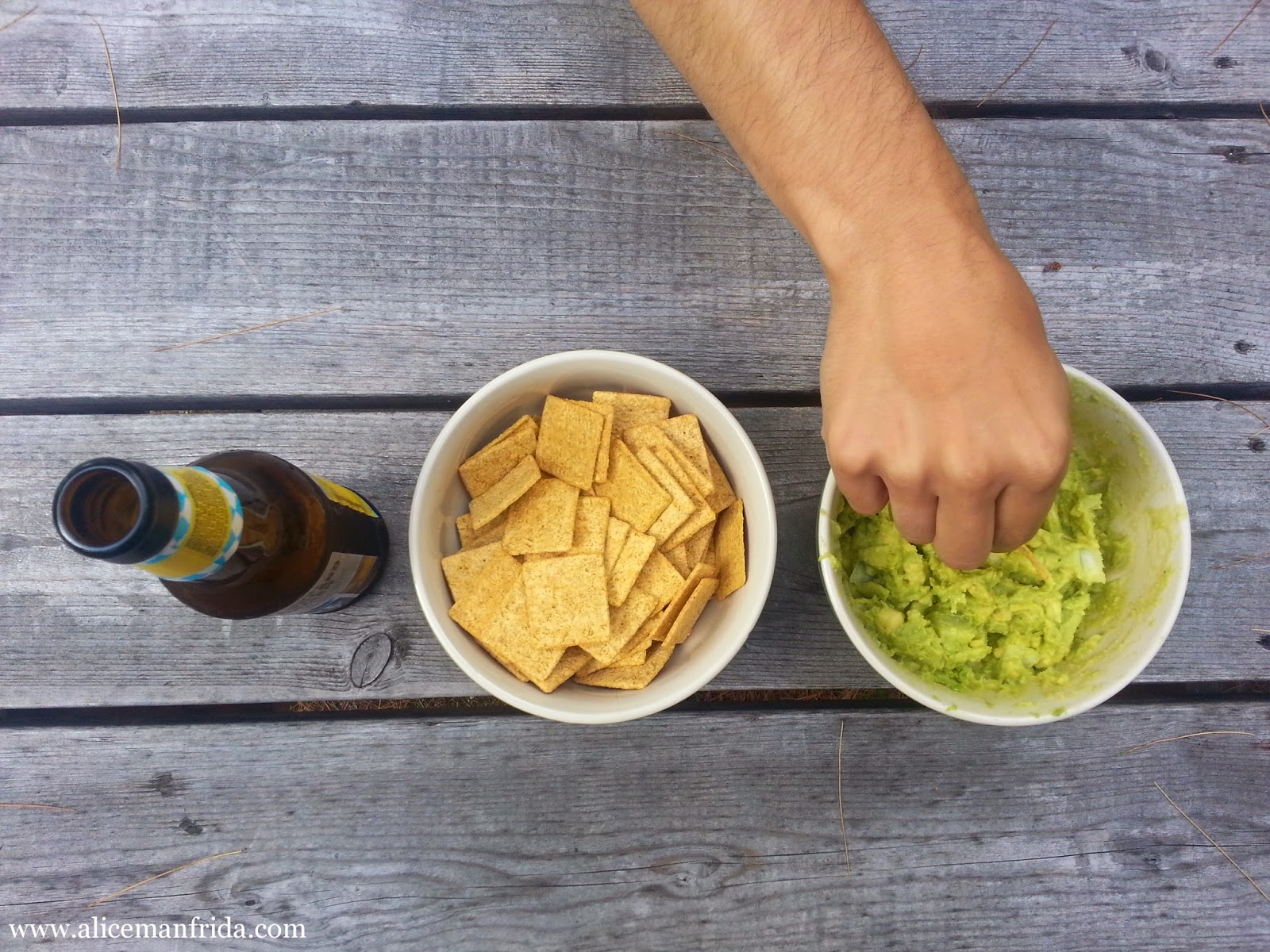 I made guacamole to have with crackers.  Also...the obligatory vacation beer. 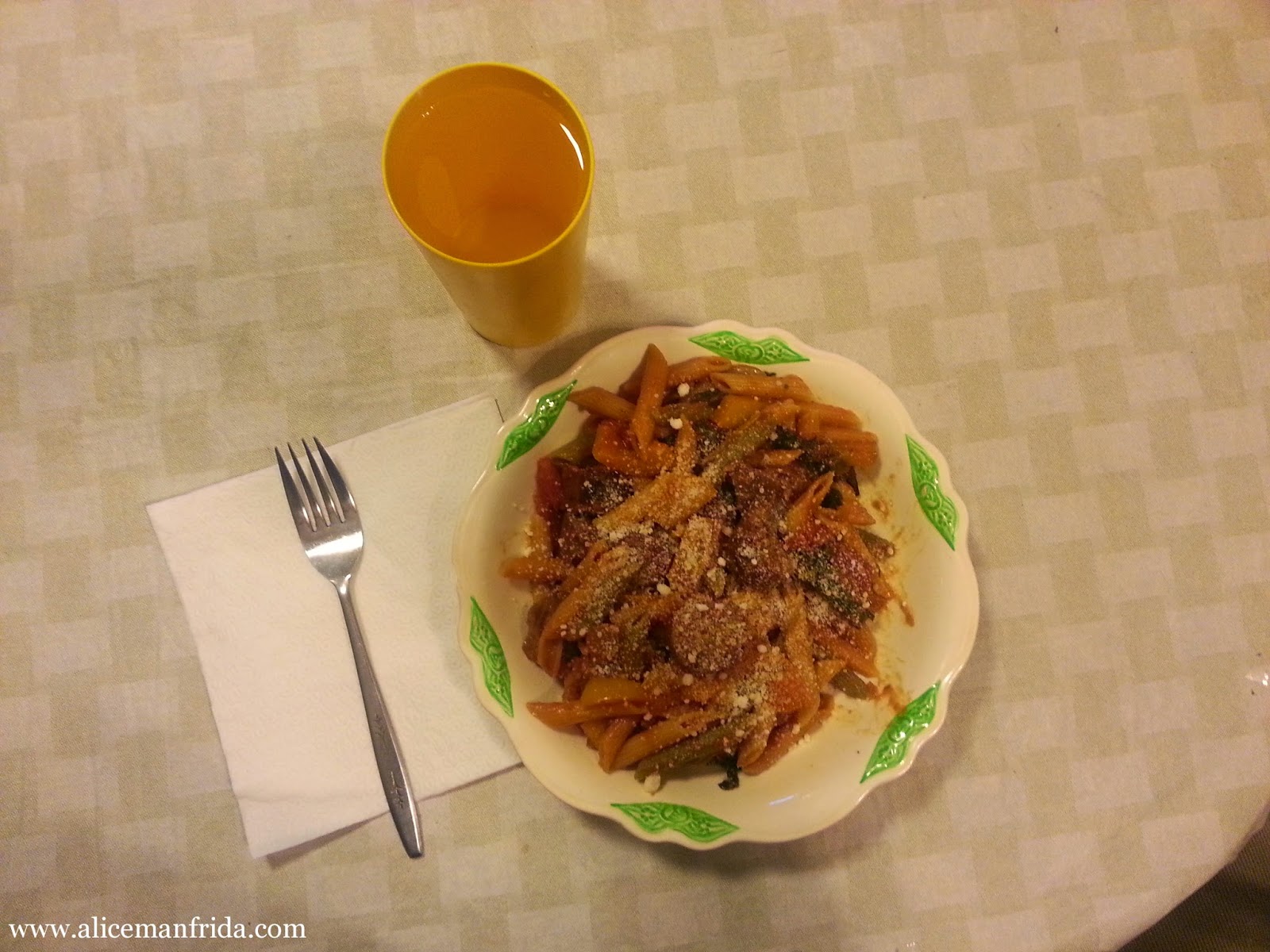 Steve cooked brats on the grill.  They were sooo good!  We put onion, pepper, and swiss chard in with pasta and tomato sauce then chopped up the sausage and mixed it in with some parmesan cheese. 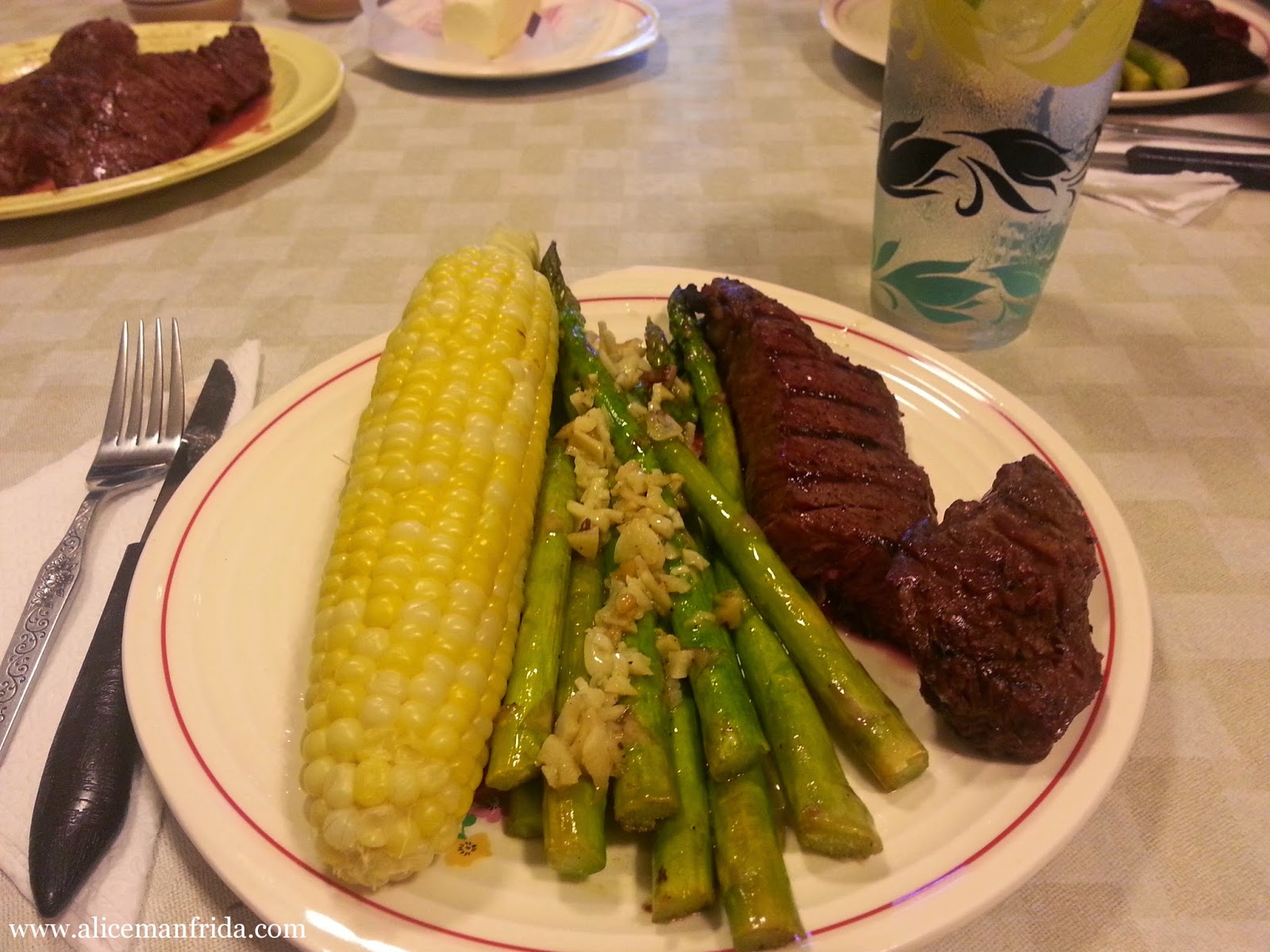 I love steak right off the grill!  We only put salt and pepper on the meat.  The corn had butter and salt, and the asparagus was baked in the oven while drenched with salt, pepper, butter, olive oil and a giant amount of garlic.  So so yummy! 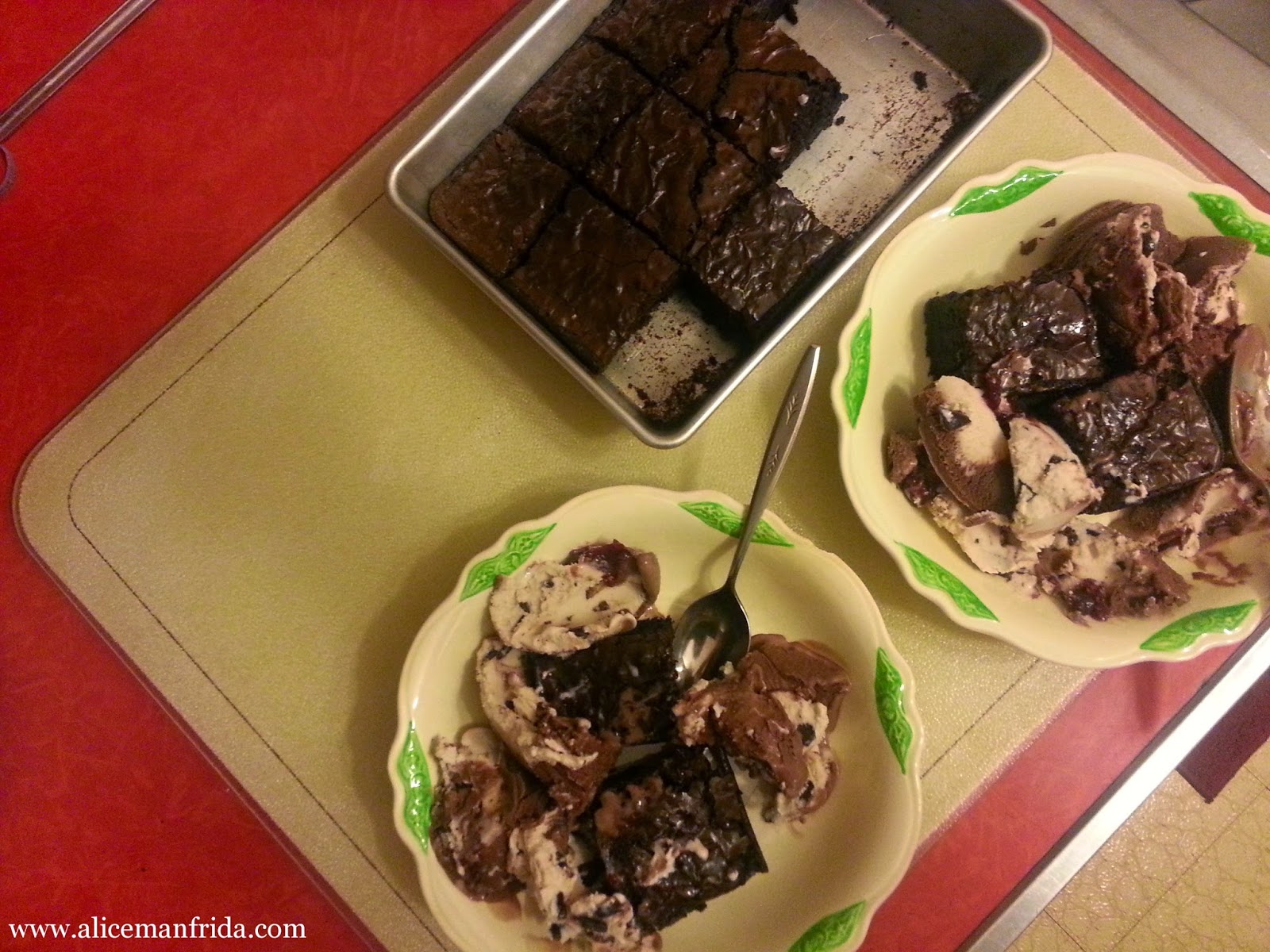 Brownies!!!  We ate these pretty much every day.  The best day was the first day because on that day we also had ice cream.  We got Ben & Jerry's chocolate and raspberry.  The raspberry part had chocolate chips in it and then there was this weird blob of what I'm pretty sure was frozen raspberry jelly in the middle.
Posted by Unknown at 8:30 AM