Jambalaya is so good! 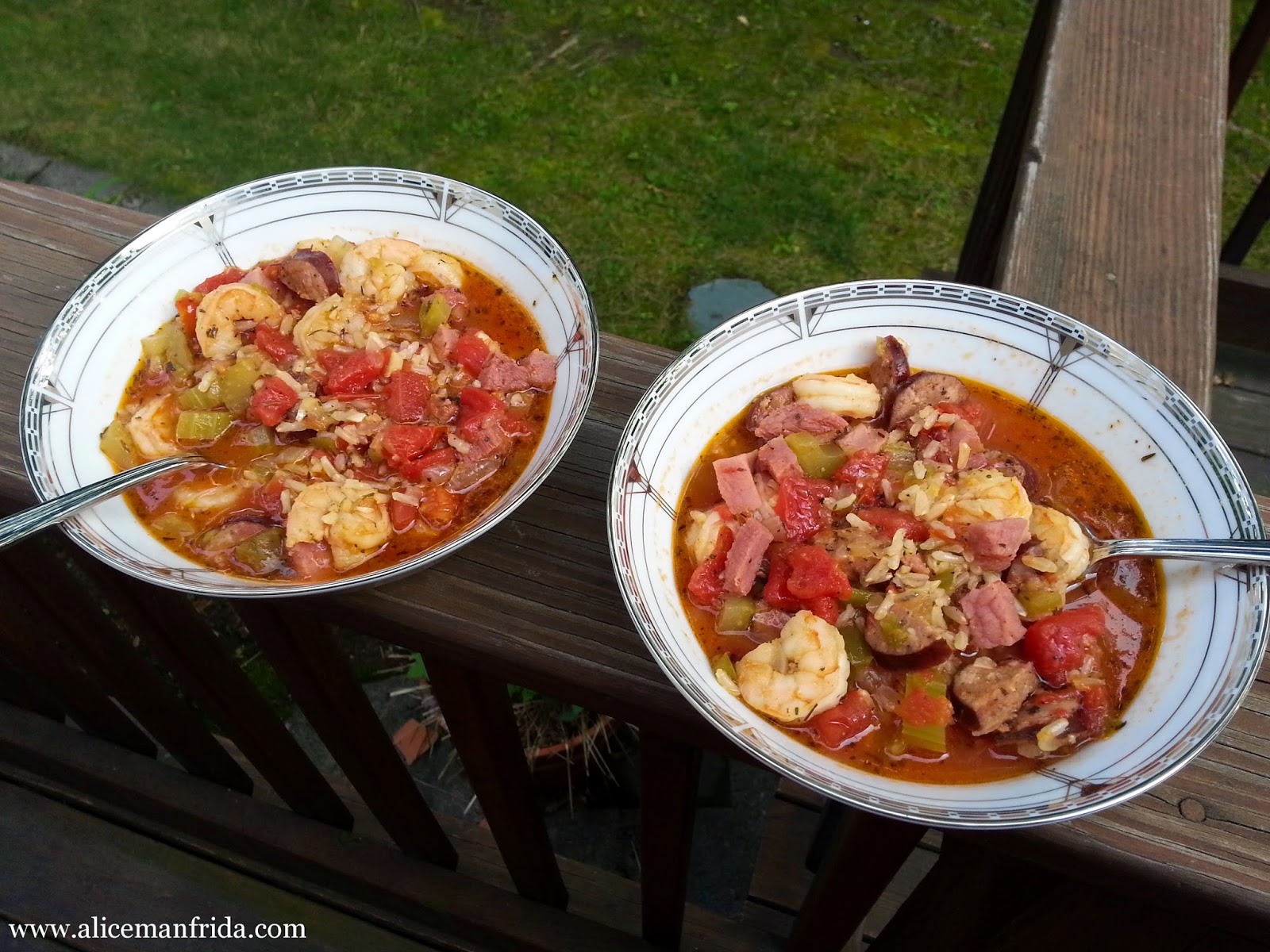 I have made this so many times and every time I think, "I should make this more."  I have made it super spicy and super mild but this time I just made it regular, which is slightly spicy.  I also included ham this time, which I don't always do. 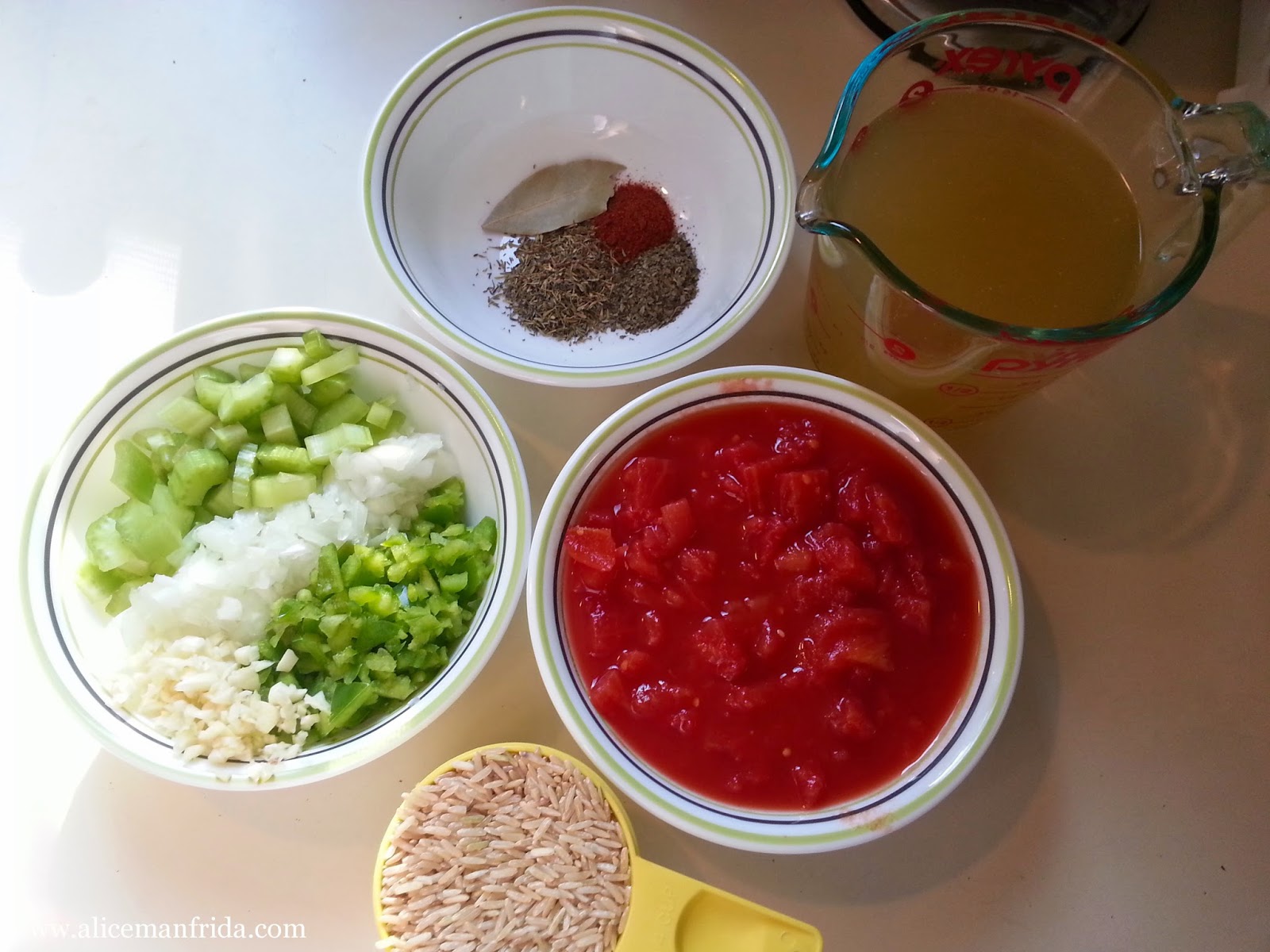 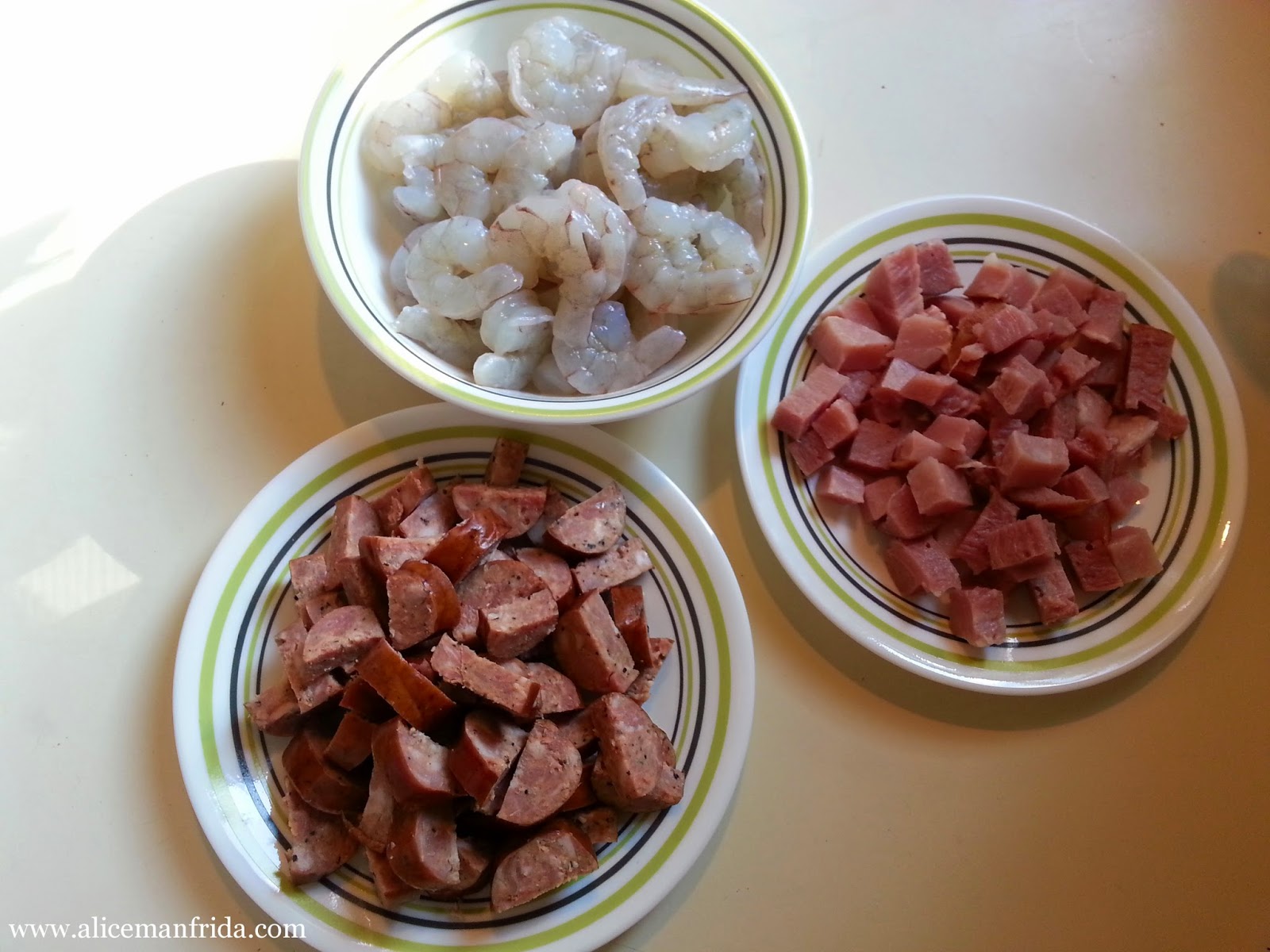 First, stop wearing the white shirt that you are wearing because if you think you won't get tomato stains on it you're wrong.  (I did change my shirt.  I only got a teensy tiny spot on it first.) 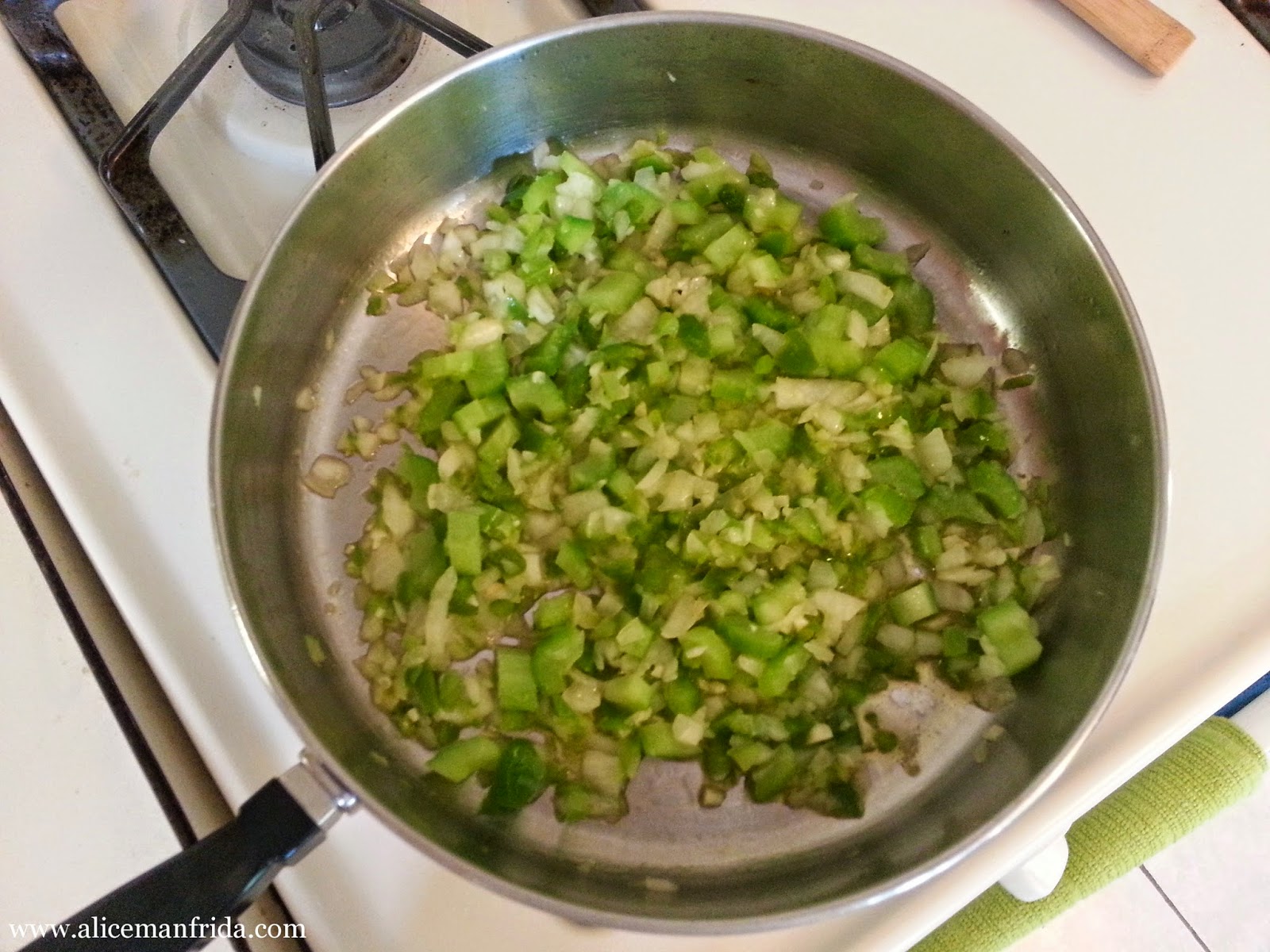 The veggies go into the hot oil.  This smelled soooo good!  I just wanted to eat this.  Actually, it would probably be a really good thing to dump on top of a baked potato.  I'll have to remember that. 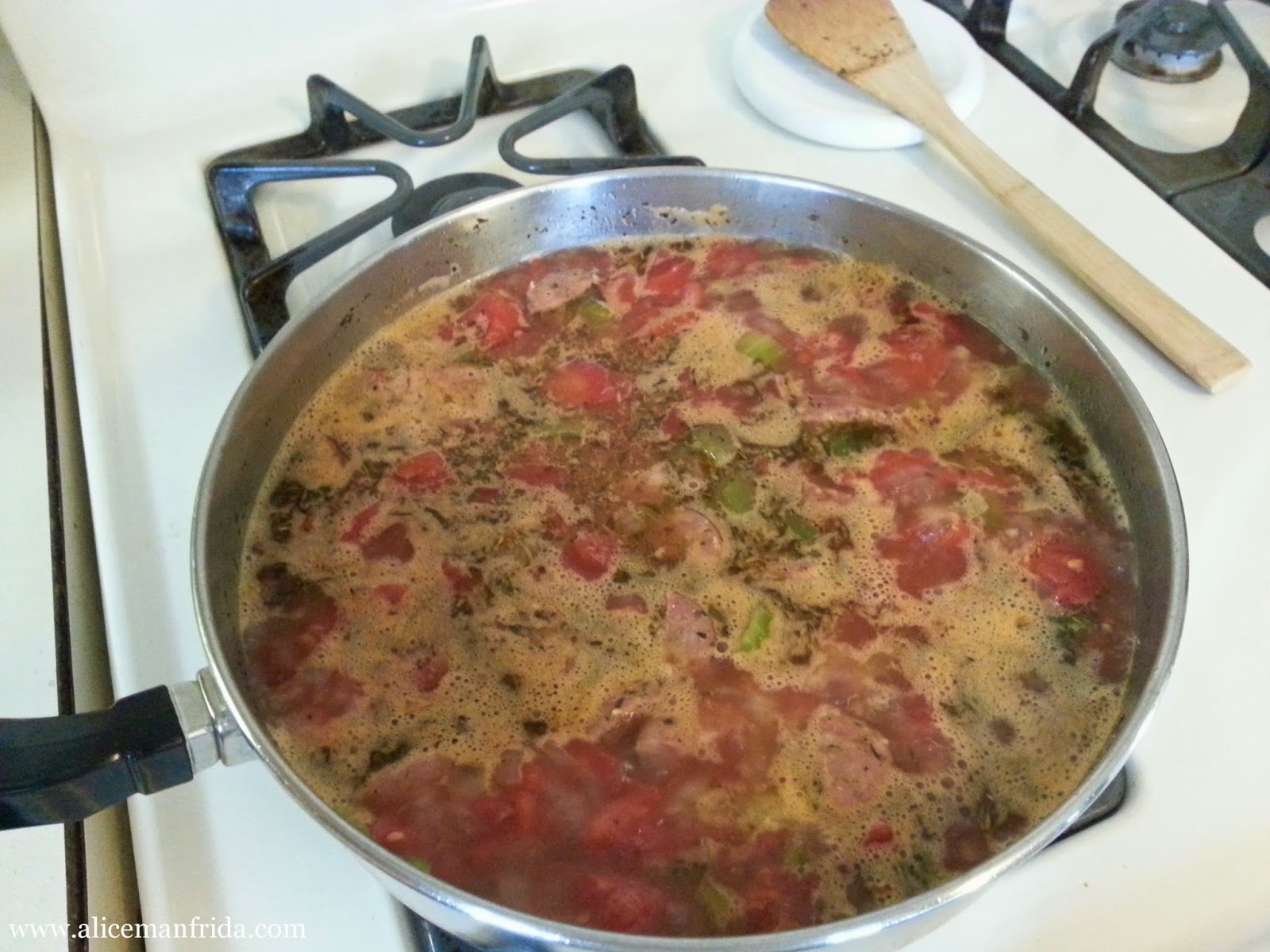 Once the veggies are soft, pour in the chicken stock, tomatoes, spices, sausage and rice.  This is when I look at my pan and think, there is still so much left to put in.  Is it going to overflow?  I literally think this every time but I have only ever made jambalaya in this exact pan and it has NEVER been a problem.  Let it boil then turn it down and cover it for a while.  My recipe says 20 minutes but I think the rice needs a little longer, but maybe I turn it down too low? 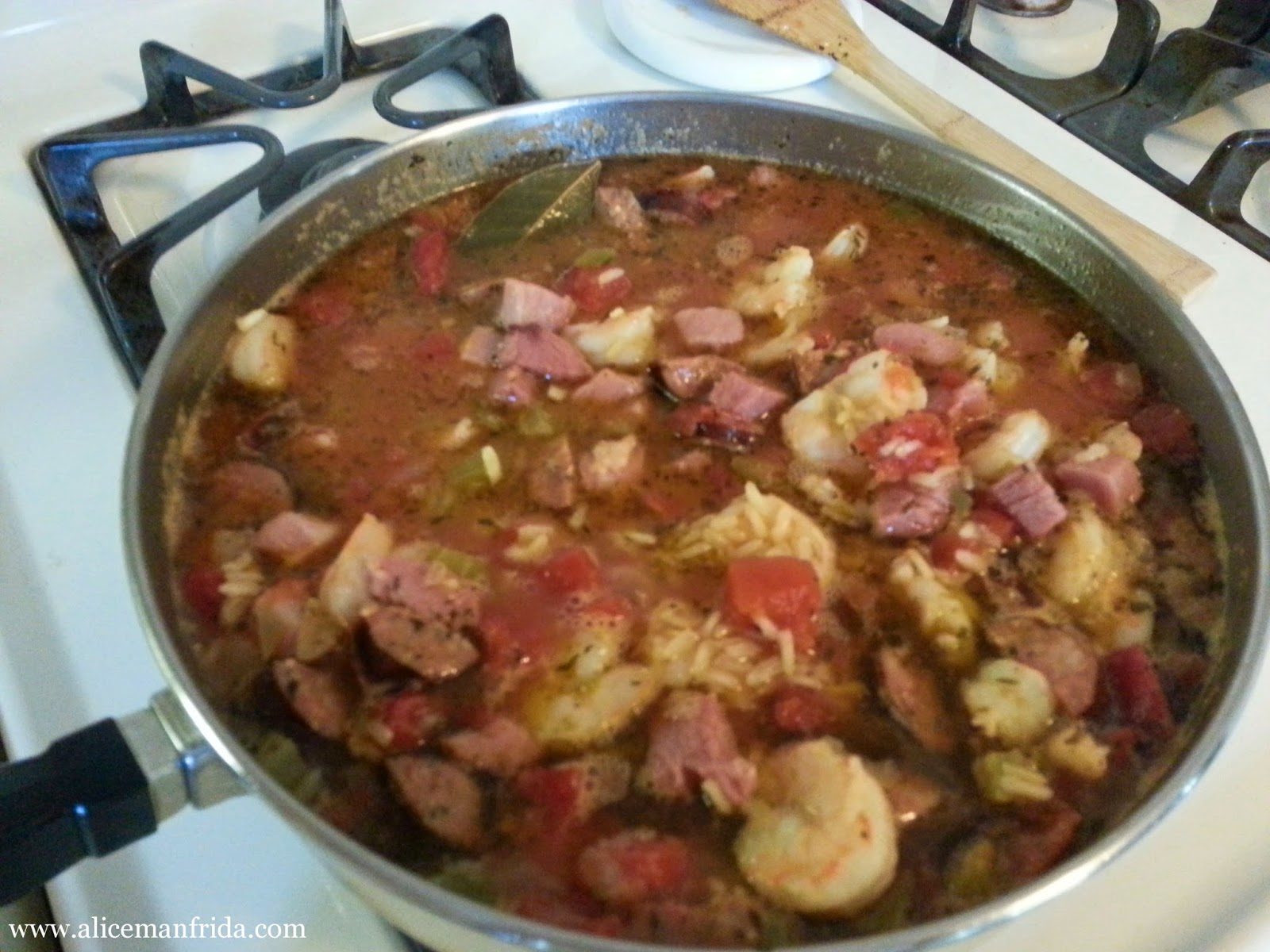 Stir in the shrimp then cover it back up for a few minutes so it can cook.  My tip for the shrimp is to only use the jumbo shrimp.  I've had jambalaya with the tiny shrimp before and it's really cute.  But the jumbo shrimp curls up pretty tight while it's cooking in all of this hot liquid so it ends up being smaller anyway.  Once the shrimp is pink and rice is cooked put the ham in.

I used 1 pound of shrimp and an appropriate shrimp-sausage-ham ratio and it made enough for two hearty sized meals for two plus extra.  The rice soaked up a lot of the liquid while it sat overnight in the refrigerator so I added more diced tomatoes when I put it back on the stove to heat it up for the second night.  This is also an easy thing to cook on the stove then to put in a crock pot to bring to a party.  It can cook and be reheated and it still tastes good because it's a stew and is supposed to be a little soggy.

Also:
In case you missed the update at the bottom of my most recent Tasty Tuesday post, I am going to try adding a second day of food posts.  (What?  I like to eat.)  Here in the Manfrida house there is a lot of cooking happening.  Sometimes it's more involved cooking so on Saturdays I'm planning to do more involved food posts on this blog.
Posted by Unknown at 8:00 AM